By DOUG COLLETTE
October 13, 2019
Sign in to view read count 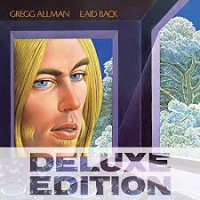 Gregg Allman's first solo album, Laid Back (Capricorn, 1973), is the ideal candidate for a Deluxe Edition reissue and remaster. Not only is the record an exquisite, one-of-a-kind piece of work in its original form, but the backstory is eminently worth telling as it sheds light not only on the creation of the album itself, but the fundamental relationship, at the time of the recording, between The Allman Brothers Band and its surviving namesake.

Kudos to the curators, including both Bill Levenson and, to a slightly lesser extent, John Lynskey, for the detailed annotation, including, in particular, the specific references of various bonus tracks, as originally released on the splendid two-disc collection One More Try: An Anthology is (Capricorn, 1997). A compilation album put together by ABB archivist Kirk West and writer/band biographer Alan Paul, that set almost supersedes this one via its thorough collation demos, outtakes, and previously unreleased alternate versions of songs mainly dating from the period in which the 1972 sessions took place, often simultaneous to the recording of the group's Brothers and Sisters (Capricorn, 1973).

That two-CD set was promptly pulled from distribution shortly after its release and has been out of print since, but that only partially accounts for the fact it is the most fascinating piece of work released under Gregg Allman's name over the course of his fifty-year career. The inclusion of eleven of its thirty-four total tracks somewhat begs the question of its re-release as the remaining sixteen cuts on this Deluxe Edition might well have been consolidated onto a single compact disc and, in turn, allowed the remastering and reissue (perhaps even the expansion) of The Gregg Allman Tour (Capricorn, 1974) released solely on vinyl coincidental with the Laid Back CD (and its own LP counterparts).

Remastering of the original eight recordings at the heart of this archival title inevitably recalls the striking impression Laid Back imprinted on its listeners upon its original release in the fall of 1973. Plush orchestration that turns "Midnight Rider" so ghostly alternates with crisp electric piano interludes on "Queen of Hearts." Equally vivid are the genuinely romantic ruminations of "Multi-Colored Lady" as they contrast with the earthy soul of "Don't Mess Up A Good Thing." Meanwhile, Allman reaffirms his extraordinary vocal capacity in equally striking fashion through his delivery of Jackson Browne's "These Days" and his own "All My Friends." His singing in and of itself evokes the broad sense of time and space depicted in the cover art of Abdul Mati Klarwein (who also did Miles Davis' Bitches Brew (Columbia, 1970), among others.

The world-weary but resolute tone of his voice, so clearly emblematic of his state of mind at the time of this album's recording, surfaces again on "Will The Circle Be Unbroken" (which he played and sang with the remainder of the ABB at his brother Duane's funeral). The traditional tune reappears in an early mix (as well as a halting demo solo), along with all the other numbers formally included on the album as released, and while they are enlightening to a degree, much of the revelatory quality comes from their juxtaposition on disc one. Nevertheless, the eight tracks, in combination with the eighteen on CD two, illustrate Allman and his accompanists were not at a loss for creative ideas: the different emphasis given the strings in relation to his voice on "Midnight Rider," for instance, is but one example of the plethora of themes at work here.

And such flash-points of inspiration are in addition to compositions that never made the final cut. The solo guitar and vocal demo of Gregg's one-time LA roommate Browne's "Shadow Dream Song" haunts in its simplicity (as does "Multi-Colored Lady" in early form) and, with hindsight, its pairing elsewhere with "Song For Adam" plants the seed for the inclusion of that latter piece of solemnity by the So-Cal poet laureate's on the final GA studio album Southern Blood (Rounder, 2018). Through it all runs the unified air of a band of musicians invested in what they're playing, not merely accompanying a singer.

Though the lush gospel arrangement of "Please Call Home" sounds both strained and over the top, otherwise rare is there instance of over-production. Still, there is nothing on either compact disc to match the majesty of Gregg's interpretation of "Rain;" Johnny Winter's diving, darting country-blues slide work on of "Wasted Words" (a tune that would eventually appear on the aforementioned ABB album out earlier this same year) almost compensates, but the absence of The Beatles' song may be the most egregious oversight in content selection from the aforementioned One More Try.

That is, if not for that of "Oncoming Traffic" the most readily extant version of which appears on the aforementioned Tour and which Duane's little brother also performed on occasion in his later years (most notably during early 2000's ABB Beacon Theater runs). An inordinately demanding music lover and fan might quibble with those decisions, especially in light of noticing an alternate mix of Muddy Water's "Rollin' Stone" (Catfish Blues)" instead. But the eternal optimist—of which there are more than a few in the Allman Brothers fan community—will no doubt anticipate more exhumations from this particular vault, at least based on public statements (some from longtime GA manager Michael Lehman) and the rumor mill that pegged Gregg's obstinacy toward archiving.

So, even as this package belies its deluxe designation form—an ordinary jewel box houses a twenty-four page booklet of essays, photos and all the necessary credits—Laid Back Deluxe Edition may nevertheless signal the opening of a treasure trove, if not exactly the floodgates of releases therefrom.