By DAN MCCLENAGHAN
October 20, 2015
Sign in to view read count 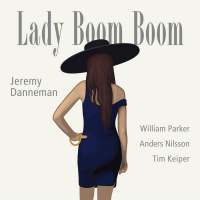 The CD Lady Boom Boom slides across the desk, with its provocative woman on the cover—a tight black dress with a shoulder strap slipping down—and the first thought that comes to mind is a Lady Gaga knock off. Thankfully, it's not. Lady Boom Boom is the work of Jeremy Danneman, a New York based saxophonist/clarinetist with his quartet, laying down some music that brings free jazz pioneer Ornette Coleman to mind, with its slinky opener, "Sugar Cane." Danneman, a multi-reedist, wields the alto sax here, on a simple, pretty melody, featuring a tight accompaniment from guitarist Anders Nilsson, drummer Tim Kelper and bass legend William Parker. The tune has a mournful two minute intro, followed by a bouncy, World Music momentum. Danneman's alto has a plaintive, voice-like quality as the band cooks on a relentless medium heat.

Danneman has traveled as part of his musical education. Street performances in Vietnam, Cambodia and Rwanda can be found of YouTube, and a flea market performance featuring a Jeremy Danneman/Sophia Nzayisenga duo can be found there, too. Nzayisena is billed as "perhaps the world's only professional woman the insanga player," and she is spectacular.

Danneman breaks out the baritone sax on "Mutobo March," a lively shuffle down a narrow Africa byway, with Parkers bass riding deep in the groove behinds Danneman's grumble and growl. The music jettisons gravity on "Clouds Talking About the Weather," with a floating clarinet and tick-tack percussion (sounds like a manual typewriter) riding Parker's cushion-y bass lines. Then Danneman switches to the more robust tenor sax. The title tune is otherworldly and mysterious, perhaps the freest offering on the disc, a discordant introduction to the "The Toothless Old Woman Warns the University Girls About Men." This tune, at nearly a half hour in length, features William Parker's trance inducing bass lines and an array of African motifs, including a drone that sounds like a Jew's harp, or maybe Garth Hudson's wah wah pedal enhanced clavinet from "Up On Cripple Creek," backing Danneman's shifting reeds in a deep spiritual seach. Mesmerizing, the disc's highlight.