By HRAYR ATTARIAN
February 9, 2018
Sign in to view read count 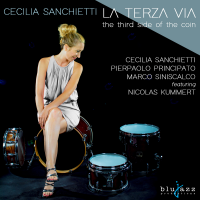 Italian drummer Cecilia Sanchietti is an elegant musician and thoughtful composer. Both attributes are amply demonstrated on her second release as a leader La Terza Via, loosely translated as "The Third Side of the Coin." Of the ten captivating pieces that comprise the album seven are Sanchietti's originals and the other three seamlessly fit within the overall conceptual unity of the disc.

The leader's antiwar "Not (in) my name" is dramatic and multifaceted. It opens with poignant and bitter martial drumbeats. Belgian saxophonist Nicholas Kummert lets loose dense, floating lines over the resonant rhythm flourishes. Kummert, who is also an accomplished vocalist, makes his tenor sax sing in forlorn and yearning phrases. Pianist Pierpaolo Principato contributes a contemplative improvisation while bassist Marco Siniscalco solos with lyricism and eloquence. The tune transforms to a peaceful, lullaby like, nocturne and delightfully concludes on the cautionary note of Sanchietti's unaccompanied rolling thrums.

In contrast composer and bandleader Maria Schneider's "Hang Gliding" is exuberant and expansive. Principato's angular vamps contribute subtle tension to the ambience. Sanchietti and Siniscalco add lithe and agile lines that together create a suave, instrumental dance. Kummert blows with warmth, passion and erudite spontaneity. The quartet members complement one another for a moving and cinematic performance.

Equally intriguing is the trio's interpretation of the title track. It starts off with Siniscalco's reverberations echoing against silent pauses followed by the ensemble stating the theme with overlapping refrains. Principato lets loose shimmering crystalline melodic cascades. Sanchietti takes center stage with breathtakingly energetic and muscular polyrhythms showcasing her prowess as a percussionist.

Still early in her career Sanchietti has proven herself a unique and versatile artist. Her compositions are engaging, her drumming gracefully nimble and her rapport with her band fluid. The result is a charismatic work that, even without breaking new ground, is soulful and satisfying.