By EYAL HAREUVENI
August 30, 2014
Sign in to view read count 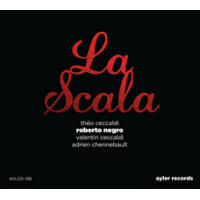 La Scala (the ladder or stairway in Italian} was a theatrical production that bore this atypical chamber ensemble featuring French pianist Roberto Negro, brothers Theo Ceccaldi Trio on violin and viola with Valentin Ceccaldi on cello and percussionist Adrien Chennebaut. The idea, like the play's title, was to find a musical equivalent to the concept of ascension. The music—composed and improvised---symbolizing a pathway through a spiral staircase, a paper stairway, a stepladder, an ever unpredictable rope ladder, used by this sure-footed, opinionated quartet with a constant ear to each other's movements. It can also be listened to as a reflection on the typography of an open scale with enough space for the resourceful musicians to sculpt in winding, uplifting ways.

Their compositions stress the dramatic, demanding plot, juggling beautifully between tormented contemplation and explosive lyricism, best exemplified on the long opening piece "Zapoï." The quartet sees its musical aesthetics as inclusive, encompassing organic ideas from innovative, modern composers such as Béla Bartók , Arnold Schoenberg and Karlheinz Stockhausen with elements of blues, jazz and even rock. After the intense, dramatic opening, the rest are shorter and focused on highlighting one dramatic idea. Still, these adventurous minimalist pieces, especially the explosive "Deuxième Service" and the festive "Free Dots to Pax, part 2," do not comply to any genre or convention. All suggest an ironic, and even an amused perspective on the never ending human aspiration to sculpt a path—sonic, artistic or spiritual—to a higher plain.