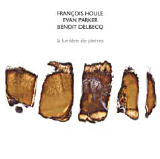 The music here consists of three tracks ranging from eleven to eighteen minutes. The opener, "Stone Through Sunlight," is longest and starts tentatively, establishing a mood of tranquility with Delbecq's piano well to the fore. After a call-and-response duet between clarinet and saxophone, with the two interweaving like they'd been doing so for years, there is a similarly impressive passage involving all three players that builds to a controlled crescendo. This gives way to an interlude for Houle to build an unaccompanied solo, starting barely audibly and slowly constructing with an architect's sense of form and logic; Parker and Delbecq join in quietly and supportively, leading to more three-way exchanges. The piece concludes with a fine Parker circular breathing solo. From the start, this trio sounds mature and established, not like players just getting to know each other.

"Moonlight Through Stone features a number of brisk sections when all three are playing at full-tilt to thrilling effect. Just as effective though are duet passages when Parker and Houle play musical tag, sounding very playful indeed. The slow ending—stately clarinet punctuated by piano chords—is very atmospheric and conveys a great sense of emotion. "Stone On Stone is just as good; the preparations to Delbecq's piano are most noticeable, as they produce a brittle, metallic percussive sound.

This is chamber improv of the highest caliber, without any of the pretensions that the term may imply, it manages to sound playful and fun.

Stone Through Sunlight; Moonlight Through Stone; Stone On Stone.