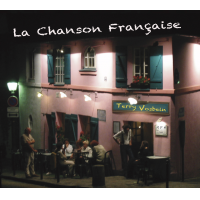 There's something about the music of France that strikes a romantic chord in almost every heart. Even when writing about anguish, loneliness and ennui, the French have a way of encasing those emotions within beguiling melodies that somehow make the pain seem more endurable. It is this singular blend of gallic romance and sorrow that animates La Chanson Francaise, the newest CD by Virginia-based composer / arranger Terry Vosbein who leads an earnest and well-spoken nonet (also his ally of choice on an earlier album, Come and Get It!)

It was while living and working in Paris that Vosbein warmly embraced the music of that city and decided to recast some of its more seductive melodies into a jazz framework to further enhance their intrinsic charm. After narrowing a long list of choices to an even dozen, Vosbein added a theme of his own, "Dans le Vieux Montmartre," to make it a baker's dozen. Several of the melodies will be familiar to American listeners, as they were transposed into such popular songs as "What Now My Love," "Beyond the Sea," "I Wish You Love," "Under Paris Skies" and of course "La Vie en Rose," a mega-hit in this country for French songstress Edith Piaf in 1947.

Besides Piaf, there are songs here by Charles Trenet (four), Jacques Brel (two), Michel Emer and Charles Aznavour —but none by Michel Legrand. Trenet wrote "La Mer" (Beyond the Sea) and "Qe Reste t'il de Nos Amours" (I Wish You Love), Hubert Giraud and Jean Drejac "Sous le Ciel de Paris" (Under Paris Skies), which lowers the album's curtain. The ensemble opens with a swashbuckling rendition of Gilbert Becaud / Pierre Leroyer's "Et Maintenant" (What Now My Love), underlined by Rusty Holloway's resonant bass, which sets the tone for everything to follow. And what follows is by and large delightful, thanks to Vosbein's impressive charts and ardent blowing by the nonet, each of whose members is a productive soloist as well as a tenacious team player. As for swinging, it doesn't come much heavier than on "Sous le Ciel de Paris," Brel's "Quand on n'a Que L'Amour" or Trenet's "Menilmontant" and "La Mer." There's a Kai and J.J. vibe to Emer's "L'accordeoniste," a Basie feel to Charles Dumont's "Non, Je ne Regrette Rien" (with ex-Army Blues stalwart Tony Nalker deftly shadowing the Count).

In closing, a word about the recording itself. Although no date or venue is given, the album was more than likely taped during a concert at Vosbein's home base, the College of William & Mary. While one might assume that playing so well in front of an audience would be a source of pride, not embarrassment, it seems that every effort has been made (not always successfully) to erase applause after solos, and none is heard after any of the selections. Why? That's a good question, as the performance is about as error-free as might have been the case in a studio. So why try and hide the fact that it was live? We may never know. Be that as it may, La Chanson Francaise is a flavorful bonbon that is sure to gladden the heart and soul of any Francophile as well as those who simply appreciate melodious, swinging and well-played contemporary jazz.