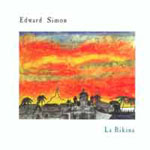 Lovers of jazz piano, Latin-flavored music, and the tender elegance and power of Keith Jarrett's playing will find all this and more in Edward Simon's La Bikina. Simon hails from Venezuela and also brings some Cuban flavor along in his lively yet lilting style. Smell the salsa cooking, hear the exotic percussives, toe-tap that dance unique to Simon's sound. He flies all over the keyboard, pausing leaping, running, skipping, hop-scotching — his soul laughing on "El Manicero (The Peanut vendor) Part 1." Ah, metal drums, drift in and out to herald David Binney on alto sax. You ain't alive if this doesn't move you. Somewhere, a lady's feet are smiling and her hips dancing.

Title track, "La Bikina" is a 14:30 reworked Venezuelan folk song with Simon and Binney pulling together a feel that recalls Lost Tribe or solo Binney releases. I also hear that gentle sway of ECM's Gallery here. This is quality through and through. A romance of keys. Adam Cruz on drums and Ben Street on bass are marvelous. Simon is pure magic on piano. Binney as always is flawless, fluid, and finds his signature release soloing.

So much is so very good in each song. I can only say this is a delight to experience. "Ericka," by Simon's brother, Marlon, shows Edward playing very Jarrett. Simon outros with "El Manicero Part 2" ablaze with more incredible keyboard flourishes that segue into a march-like drivin,' rhythmic progression, that is my favorite groove on the disk right behind "El Manicero Part 1." Binney and the rest of the crew each lift the moment higher and higher. Simon has accomplished a strong offering of quality jazz — and a taste of other lands. Recommended.