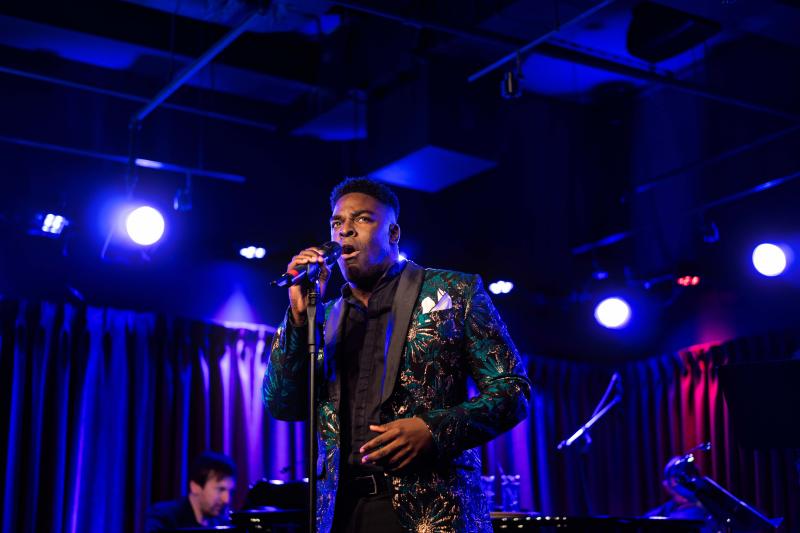 Kyle Taylor Parker made a splash when he replaced Billy Porter as Lola in the Broadway hit Kinky Boots. Since jumping into the deep end of musical theater, however, he has never forgotten the even deeper roots that gave creative purchase to his crisp, clarion voice in the first place. "I think in Broadway lyrics, but feel in soul, jazz, and blues," he told a sufficiently entertained audience at The Green Room 42, a new-ish venue playing host to his "Soul Session" series. Through said series, he rebrands show tunes as standards in their own right, sprinkling among them personal favorites from the popular canon for good measure.

Like any jazz musician worth his threads, he was patient in his thematic unpacking, gave primacy to the melodies, and shared the stage (and the love) with a group of passionate musicians. Flanked by a superb trio of backup singers (KC Comeaux, Alexis Simms, and David Rowen) and uplifted by the eclectic stylings of guitarist Hiro Homma, bassist Colin Dean, drummer Zach Eldridge, and pianist Johsua Stephen Kartes, he flew through his carefully chosen repertoire with eagle-eyed precision.

From an obvious love for all things Broadway, KTP dealt and fanned a royal flush of timeless selections. Whether setting the world on fire in the concert's opener ("We Are Young" from Fun) or turning the familiar strains of "Do You Hear the People Sing?" from Les Misérables (hats off to Simms for her powerful solo turn!) into a personal crusade, at evening's end the air practically sparkled with optimism. Other musicals referenced included Next to Normal ("I'm Alive"), Rent ("Out Tonight"), and The Wiz ("Don't Nobody Bring Me No Bad News"). Hairspray's "Run and Tell That" showed a playful side to KTP's artistry, one unafraid to get a tan in the blinding spectrum of sexuality that makes up the human landscape. Other highlights included "Think of Me" from Phantom of the Opera) and West Side Story's "I Feel Pretty." For the latter, KTP was joined by Kinky Boots costar Joey Taranto in a rainbow-hued duet.

As a veteran of the stage, KTP has clearly absorbed the finer nuances of embodying songs to their fullest emotional extent. Cases in point were his gorgeous renditions of Bobby Hebb's "Sunny," Cole Porter's "Anything Goes," and Nina Simone's "I Wish I Knew How It Would Feel to Be Free." His diction, phrasing, and adlibbing worked seamlessly to fill the room with heartfelt vibrations. Another such standout was "The Shape of Love" by songwriting team Jacob Yandura and Rebekah Greer Melocik. This brief yet arresting ballad was a more-than-suitable vehicle for a voice that lives on freedom rather than any other fuel.