By NORMAN WEINSTEIN
November 14, 2006
Sign in to view read count 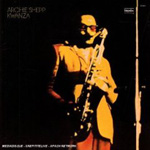 This big band session collects all of Archie Shepp's virtues as a composer, saxophonist and jazz dramaticist and puts them into one glorious package. Like the African-American holiday this album is named after, it's an imposing hybrid form, a sprawling mass of experimental jazz circa 1969 sharply peppered with funk, blues, and myriad musical evocations of an imaginary "Africa."

Not only was Shepp consistently soloing with as much dynamic originality as he would ever do—gruff, hoarse, but consistently and logically lyrical—his assemblage of players was absolutely at their peak. The shamefully under-recognized trombonist Grachan Moncur III plays with furious splendor on his own composition, a moody tone-poem summoning up some utopian African vision, "New Africa." Moncur is equally sensational when teamed with the brassy front line of Shepp, trumpeter Jimmy Owens, and saxophonists James Spaulding and Charles Davis on the "James Brown-Meets-Free Jazz" funk workout "Back Back." Vocalist Leon Thomas controls his zealous yen to yodel, and uses it with great grace and taste on Shepp's brief anthem to Black liberation, "Spoo Pee Do," whose title is a Philly slang term for "everything's fine."

Since it is nearly impossible to listen to '60s Shepp without evoking his mentor, John Coltrane, it is fascinating to hear Shepp's cover of Cal Massey's "Bakai," an ungainly repetitous vamp that even Coltrane couldn't make interesting on an earlier Prestige recording. With the help of trumpeter Woody Shaw, Shepp creates a blisteringly dramatic anthem out of Massey's tedious original that makes Coltrane's version seem pale by comparison.

Shepp always had a melodramatic flair in the '60s. This led to a sometimes contrived and self-consciously "streetwise/New Jazz" approach that flowered on Mama Too Tight (1966) and Attica Blues (1972), both grander in concept than in execution. His melodramatic excesses are in check here, his choice of players impeccable. Kwanza sounds fresher than the last six albums by any Marsalis family member of your choice. And only the liner notes, written in an unconscious parody of Amiri Baraka at his most windy, date the product.