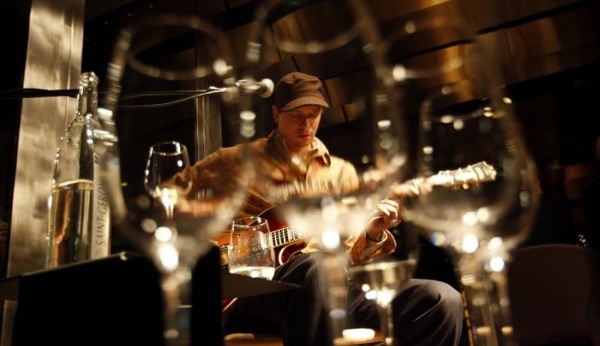 The Berlin based guitarist and composer Kurt Rosenwinkel spent two days performing in Barcelona this week in two markedly different contexts. His loyal fans turned out en mass at the famed Luz de Gas, an intimate club in the Eixample neighborhood, to hear his trio, resulting in an illuminating set of standards featuring drummer Ted Poor and bassist Eric Revis (look for more information in our ongoing festival coverage).

The next night he was equally at home inside the Mecca of Wine, Monvínic, which The Wall Street Journal quipped "The Greatest Wine Bar in the World." "Its much more than a wine bar," states Joan A. Cararach, the Festival Artistic Director and event Master of Ceremony, "its an experience." Cararach and festival sponsor Sergi Ferrer-Salat, Monvínic's founder and head of the Ferrer-Salat Music Foundation, are apasionados who transformed their love of wine and jazz into an ambitious evening, destined to be an annual fête in celebration of the Barcelona Voll-Damm International Jazz Festival.

A packed audience of oenophiles had the privilege to sniff, taste and ruminate over wines that were as rarefied an experience as hearing John Coltrane's A Love Supreme for the first time. Rosenwinkel's task was to give musical expression in the form of six solos, each selection paired to the taste of the specific wine. "I had the opportunity to taste the wines in Paris and during my European tour just prior to arriving here so I tasted and felt that I had a comfortable frame of reference," stated the guitarist.

Hosting the event (which featured a captivating cross-section of vignerons from Spain's renowned wine regions), were two innovative wine industry figures, the famed merchant Quim Vila (Vila Viniteca) and the sommelier Josep Roca, co-owner of the famous El Celler de Can Roca, a three star Michelin restaurant in Girona (north Barcelona). Their words described the essence of each wine which served to form the foundation for Kurt to explore his musical palette in a profoundly unique and original way. The six wines included: 2009 Taleia (Costers del Segre) by Raül Bobet; 2007 Do Ferreiro Cepas Vellas Magnum (DO Rías Baixas) by Gerardo Méndez; 2006 Sot Lefriec (DO Penedès) by Laurent Corrio and Irene Alemany; 2001 Clos Mogador (DOQ Priorat) by René Barbier; 2001 Molino Real (DO Málaga) by Telmo Rodríguez, and Valdespino Coliseo Amontillado V.O.R.S. (DO Xerès-Sherry) by Eduardo Ojeda. 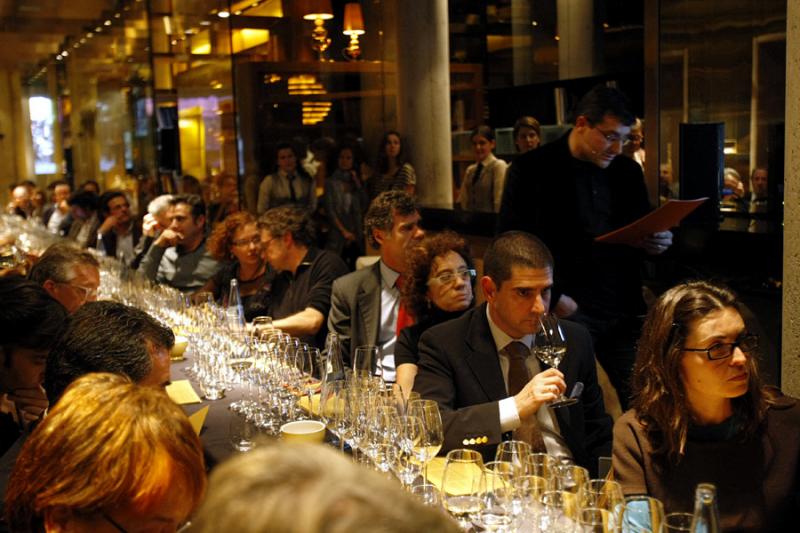 Each guest was poured a half glass in intervals of approximately 20 minutes. The two hosts effusively praised each wine which set Rosenwinkel in motion to perfectly balance and compliment each vintage sampled.

The first wine, a 2009 Taleia, was a light and airy white with exciting aromas of fruit, minerals and scrub with a taste of colorful floral (thyme flowers), with accents of oranges (guava and mango) and yellows (lemon and pineapple), set the proper tone which invited a curious cross-section of musical notes and conversation. Seamlessly introducing the second white, a 2007 Do Ferreiro Cepas Vellas, was filled with aromas of peach and grapefruit skin, reineta apple and mint, this bold wine while compact, is incisive and exciting with a finish wrapped in a delicate smokiness and fine bitterness.

The transition to red was flawless and what better way to continue the journey than a stopover in the sublime Penedès region which is underscored by the freshness of the Mediterranean climate. The 2006 Sot Lefriec is a full wine, deeply colored and dense with a compact nose. In the mouth it is an imposing wine with no sharp edges and the flavor suggests dominant notes of blackberry and violets, against a deeper background of roots and spices. With the audience now ensconced in a warm afterglow of sonic bliss, the much anticipated 2001 Clos Mogador was introduced as a wine that stands alone with only a few bottles of this vintage remaining in the world. An estate wine filled with a touch of wild and warmth, its the Mediterranean at its best. References of Cabernet and Syrah, ancestral Garnatxa and Cariñena burst from the soil to the palette, and we were transfixed by the aromas of sun, dried fennel, lavender, majoram, black olives, nuts, peat and earth.

The final two presentations shifted to the extreme south in the Andulusia region of Málaga and Jerez. The 2001 Molino Real is the Moscatel grape bursting with lively fruit with the smells of honey, quince, ginger, lime and laurel with muscatel raisins, lemon verbena, green tea and candied bergamot peel. The sweet finish is smooth, recalling sugared almonds ensconced in honey. This is a desert wine of the highest order, one that will be remembered and cherished for a lifetime. The conclusion was the Valdespino Coliseo Amotillado V.O.R.S., a sherry from the earth of bright limestone, giving it a chalky minerality of distinction with an unsurpassed finish of a fresh sea breeze celebrated in grandeur and pride with an imposing demonstration of an intense length.

What a way to bid farewell to an evening of exploration and discovery and to be in the presence of greatness by masters of preparation and improvisation. It was a night one won't forget, perhaps the time you heard Bill Evans at the Vanguard, Miles Davis at the Fillmore, Thelonious Monk at the Five Spot, Dexter Gordon at Monmartre, Bobby Hutcherson at Shelly's or Andrew Hill at Birdland... It's not just the notes but the experience and this was The Kurt Rosenwinkel Monvínic Experience, one of hopefully many more to come in the city known for its great food, and architecture and of course wine and jazz.