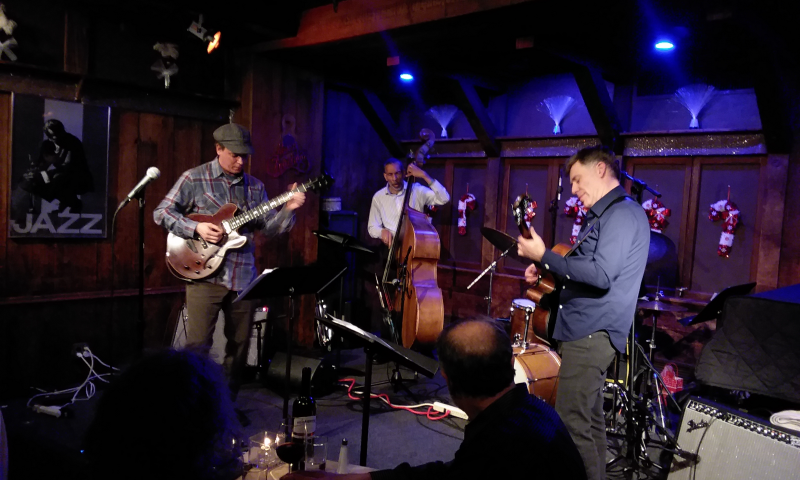 As the New Year approached in frigid weather, venturing out in the cold to Chris' Jazz Café to hear two of the finest jazz guitarists close up proved to be a great way to warm up and look towards jazz in 2018. Since Pat Martino had performed on the same stage a month prior, the experience also afforded a glimpse of the way in which the guitar, perhaps the most "personal" of all the instruments, becomes an extension of the particular musician.

Each member of this group has his own signature, so their challenge was to form an integrated unit, and this task was well-accomplished by these seasoned players. Rosenwinkel and guest artist Peter Bernstein play very differently, the former with seemingly infinite versatility and smoothness, the latter embodying the Blue Note Records hard bop trademark. Yet they complemented one another very well, providing a rich array of sounds and producing tight patterns of coordinated comping and improvising. Bassist Mike Boone, the one musician based in Philadelphia (Rosenwinkel is originally from Philadelphia, but has long since moved on globally) kept the group centered with his well-crafted lines and walking pulse. Drummer legend Victor Lewis provided the passion behind the intelligence with a unique combination of sheets of sound (a phrase often used to describe the continuity in John Coltrane's sonority on the saxophone) on the ride cymbal, with hard-hitting percussive drive on the rest of the drums.

The set consisted of five tunes composed by jazz legends, each of which had its own flavor and challenges. It moved from straight ahead jazz standards (Benny Golson's "Along Came Betty" and Wayne Shorter's "United") to more intricate pieces (Miles Davis' "Milestones" and Charles Mingus' "Portrait in Three Colors"), and concluding with McCoy Tyner's "Blues on the Corner," presenting the rhythmic challenges of a blues walk with stride rhythm and a touch of Thelonious Monk.

Right away, with "Along Came Betty," Rosenwinkel and Bernstein enriched the possibilities contained in this beautifully constructed jazz perennial. The "swing" feeling was provided by Bernstein and Lewis, while Rosenwinkel effortlessly offered rapidly moving lines that embellished Bernstein's harmonic twists. "United," as is the case with so many of Shorter's tunes, set the stage for modal improvising, and "Milestones" upped the tempo and allowed for greater creative participation by Boone and Lewis. A highlight of the set was Mingus' "Portrait in Three Colors," where Rosenwinkel varied the complexion of the basic tune in several magnificent choruses of diverse guitar "colors" in a manner analogous to an impressionist painter. Lewis made "Blues on the Corner" his own possession with inventive rhythmic phrases that captured everyone's attention and gave the group permission to get carried away, something that musicians as smart as Rosenwinkel, Bernstein, and Boone appeared hesitant to do.

The guitar is one of the most intimate of musical instruments: held near one's lap, and tendered with both hands. As Martino points out in his theorizing and teaching, it also has a cyclical format of chordal fingering, as distinct from the linear movement of the chromatic scale along the piano keys. The net effect is that it allows the finest of guitarists to finger and move along the frets each in his "own sweet way," thus developing striking, almost instantly recognizable ways of playing. Hence, we are graced to have Martino's incomparable precision, pulse, and deep, soulful sound; Rosenwinkel's seemingly effortless gypsy-like creative virtuosity; and Bernstein's crafty complexity in the hard bop idiom. The guitar thus becomes a universal symbol of diversity, an extension of both our common humanity and the uniqueness of each person on the planet.