Kurt Jarnberg: Down Memory Lane & Who Can I Turn To? 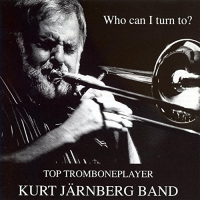 I can't quite remember how I was "introduced" to Swedish trombonist/trumpeter Kurt Jarnberg but I'm reasonably sure it had something to do with the internet. Whatever the circumstances, Kurt was kind enough to send me several of his albums, two of which we'll appraise without delay. The first, Down Memory Lane, is a big-band anthology recorded circa 1972 (the dates aren't entirely clear); the second, Who Can I Turn To? , a quintet date from '96 that includes several vocals by Ruth Asenlund-Jarnberg.

One of the more remarkable aspects of these recordings is that Jarnberg plays lead trumpet (as well as trombone, valve trombone, flugelhorn and euphonium) with the big band, trombone and flugel in the smaller group —and excels on every instrument. The larger ensemble, which Jarnberg formed in 1967 as a training ground for young musicians in the American way of Jazz, earned a number of prizes at various European festivals (Holland, Belgium, Spain) but never achieved commercial success and was disbanded, if I am reading the notes correctly, in 1974. Although the band is surprisingly adept, it is hampered by the album's low-grade sound, which even at its best is barely acceptable. We're talking minor surface noise (the transfer was evidently made directly from vinyl), erratic balance among the various sections with its attendant lack of clarity, and troublesome distortion throughout. The last three numbers, recorded in concert, showcase Jarnberg's agile trombone ("Mr Juise," "Diggin' the Old Cats") and a vocal by Asenlund-Jarnberg ("Once in a Lifetime") whose distortion is so unnerving (it sounds almost as if she'd accidentally swallowed the microphone) that one's ears are left begging for mercy.

On the other hand, the band is, as we said, quite good, the charts first-rate, and there are a number of enterprising solos by Jarnberg, tenor saxophonists Anders Lindskog and Mats Andersson, alto Hakan Levin and pianist Thomas Jutterstrom. Besides "Once in a Lifetime" and Jarnberg's "Old Cats," the ensemble performs lissome compositions by Duke Ellington, Benny Golson, Jimmy Heath, Joe Zawinul and Dave Brubeck, three perky originals by Gugge Hedrenius, Jimmy Webb's "Wichita Lineman" and an almost forgotten standard from the '40s, "The Gypsy." It's a shame the band never quite made it, as Jarnberg had assembled some excellent players. Still, the sub-par sound ensures that the album's importance is more historic than musical.

Fast forward two decades and we find that Jarnberg, playing mostly trombone (flugel on "Who Can I Turn To?"), is blowing as superbly as ever, this time in the company of pianist Jutterstrom, baritone saxophonist Niclas Lantz, bassist Leif Norberg and drummer Edward Mica, with vocals on five numbers (plus scatting on "Lady Bebop" and "Bop Home in Rimsbo") by Asenlund- Jarnberg. The sound, as one would envision, is greatly improved, and Jarnberg, who has spent considerable time abroad including some years in Australia, seems immensely pleased to be home and jamming with his fellow Swedes. The upbeat session embodies eight charming originals by Janberg, five tasteful standards, Charlie Parker's "Yardbird Suite," Jimmy Witherspoon's "Time Gets Tougher Than Tough" and Billie Holiday / Arthur Herzog's "God Bless the Child." The group gives each of them an impressive ride with muscular solos by Jarnberg, Lantz and Jutterstrom. Underscoring its collaborative purpose. A sharp and swinging quintet date that's a pleasure to hear —but even so, I cling to the hope that Jarnberg is able somehow to reactivate the big band.

Track Listing: Kick of the Blues; Where Am I; A Time and Place; Wichita Lineman; Along Came Betty; Mercy, Mercy, Mercy; A Hymn to the Sorrow; Baby Blues; Mr. Broadway; Mr. Juise; Once in a Lifetime; The Gypsy; Diggin' the Old Cats (61:47).

Who Can I Turn To?