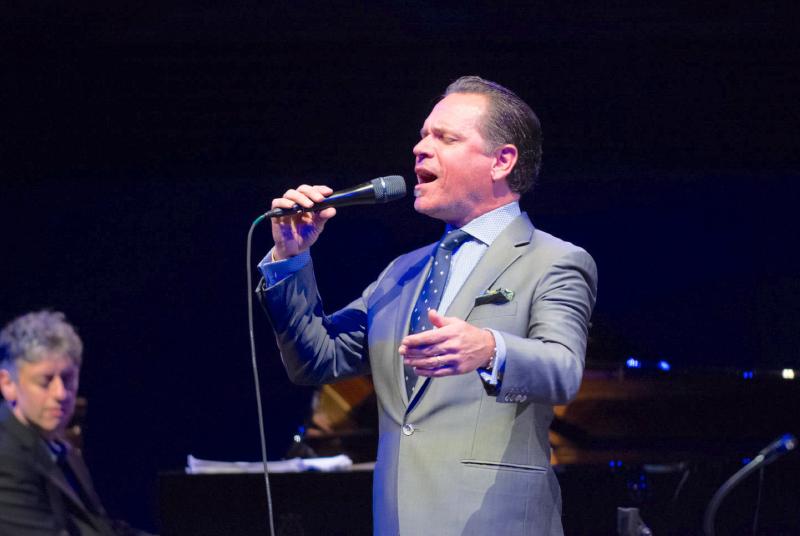 Kurt Elling is full of it—talent that is. As a vocalist, performer and writer/poet, he is just, simply—off the charts. His performance for Stanford Live at Bing Concert Hall, at Stanford University in Palo Alto on Saturday, February 27 made it clear that he is a major talent in the world of jazz today, though, surprisingly, outside of the jazz world, most people have never heard of him. This was the last U.S. stop on his current tour to promote his latest recording, Passion World.

Bing Concert Hall is an absolutely fantastic venue with state-of-the-art acoustics and "theater in the round" seating surrounding a performance area that is the perfect size to give the audience an intimate concert experience.

The evening began with a pre-concert interview with Elling by two Stanford professors, and it was a talk not to be missed, because it revealed what an intelligent, thoughtful, kind, contemplative and just plain funny guy Elling is. Dressed casually and completely relaxed, Elling answered questions with charm, wit and eloquence.

When asked if he had planned his set list around a narrative arc, Elling said that he didn't necessarily do that, but that he always tried to be in tune with and play to each individual audience, and that "As quickly as possible I want to get everybody to be here now—I want every note to count—I want it to be meaningful."

In addition to wanting to please an audience in the moment, even more interesting were his comments about pleasing his jazz predecessors. So in addition to delivering a pleasing performance to live audiences, he said, "At the same time, now that I think of it, I am playing to the audience of singers and instrumentalists who have preceded me because I want them to be proud of me. I want them to, inasmuch as ghosts do such thing, you know, endorse where I am taking the music—the Gestalt that came to them—the gift that came to Monk and to Dizzy and to Miles and to Jon Hendricks and Mark Murphy and Sarah Vaughan, I want to be part of that continuum and that family and want those people to be proud of me too."

When asked about being a musician in the digital age, Elling talked about the Internet, and how it can be used for both good and bad purposes, and that "it's just going to be a question of what you do with it." He continued, explaining how that relates to music.

"Music is the same thing. The vibrations of a singer are physical. It's not first emotional, it's not first intellectual, it's not anything other than a physical wave that passes from my body through space—through space—moving the particles in the air to you—reverberating, making the little bones in your ear go dugga dugga dugga dugga and then they become chemical and then they go to your brain and then they go to your heart which is why the sound of the voice is vitally important, and why music is so powerful, because if you know how or learn how or even just try to focus your intention on vibrating the world, a small part of the world with a compassionate, pure-ish intention, it's [the world] a little bit more lovely and wonderful. That's what makes a hit and the computer thing is kind of irrelevant to me 'cause what I do comes to living people in a breathing room and we're all doing it at the same time."

After a 30-minute break, the concert began. Elling, ever elegant (he had changed into a suit for the performance) is touring with an incredible quartet of musicians, the same ones he recorded Passion World with: John McLean on electric and acoustic guitar, Gary Versace on piano and Hammond B-3 Organ, Clark Sommers on bass and Kendrick Scott on drums. The set included songs from many of his previous eleven recordings including many tunes with lyrics penned by Elling.

They opened the set with an ethereal and jazzy arrangement (by guitarist John McLean) of the famous U2 song "Where the Streets Have No Name," with a wailing guitar solo, and it was one of the few tunes from Passion World they performed that night—I would have liked to hear more from that recording. They continued with a blues number that included Elling trading complex rhythmic scatting riffs with drummer Kendrick Scott. Throughout the evening, each band member got a chance to showcase his incredible individual chops in many different songs.

Another tune they did do from Passion World was a sadly wistful story of heartbreak, the "Loch Tay Boat Song." Elling explained that he had learned the song while backpacking years ago through Scotland, and he had never forgotten it. It was done simply—and beautifully, with just acoustic guitar. Elling's ability to convey the pain and vulnerability of heartbreak—from the male point of view, was so moving—it stayed with me for days.

And that is what makes Kurt Elling stand out—he has the ability to sing a sad ballad beautifully, with all his heart, and then turn around and scat his pants off! And he is full of energy. His rendition of the very esoteric and multi-rhythmic "Samurai Cowboy," a really hip instrumental tune by Marc Johnson that Elling wrote lyrics for, or I should really say poetry for, showcased his incredible musicality, vocalese and writing talent.

Elling is a consummate performer and a total professional. He is very relaxed onstage, and clearly enjoys himself. He is incredibly precise, and yet at the same time, incredibly spontaneous. And every song felt fresh and full of passion and very personal, as if he was performing each song for the first time—just for you.

For an encore, Elling came out to perform the beautiful tune, "The Waking," from his album, Nightmoves, with lyrics from a thoughtful and offbeat poem by Theodore Roethke and sung with just a string bass accompaniment. Elling sang it with just the right amount of sentiment and emotion that closed the evening leaving everyone present feeling like they had just experienced a lovely conclusion to a thoughtful, evocative musical journey.

All About Jazz: You are coming to the end of almost two years on the road with Passion World and other projects. Has this tour—with this particular theme—love, romance and passion, been any different from the others?

Kurt Elling: Not really. There have been love and romance themes threaded through all my recordings. The recording itself is what is a departure—the languages, the symphonic and big band inclusions, the number of guest artists, et al.

AAJ: You have been touring every year since 2006 [he has been touring almost steadily since 1995]—you are on the road a lot. How do you keep your passion and love alive with your wife and daughter, since you are away from home so much?

KE: You find a balance. Or create one. I am fortunate to have a partner who understands the needs my career imposes and supports me completely.

AAJ: You went to divinity school and yet went on to become a poet and a singer. Do you feel that music is a form of inner spiritual expression?

AAJ: Who or what religious or spiritual practices influence your writing, your music, your life?

KE: I read extensively and draw more from poetry than specific religious or ecclesiastical sources at this point. It turns out the questions are much more interesting and alive than the proffered answers.

AAJ: What are you passionate about?

KE: Singing, performing, interacting with audiences, and my family.

AAJ: What do you want to accomplish in your lifetime musically—and outside of music? What is important to you in life?

KE: I am trying to grow and work into the skin of a flexible, dependable, professional creative artist. In addition I am trying to learn to be a more kind and more compassionate person.

AAJ: Do you have any plans for new projects in the works?

KE: I have a new recording with Branford Marsalis coming out—his record, really—in June, and we'll be touring extensively. I'm also working on projects with Guy Barker, Tommy Smith and Till Bronner.