Kurrent Duo at The Bop Stop 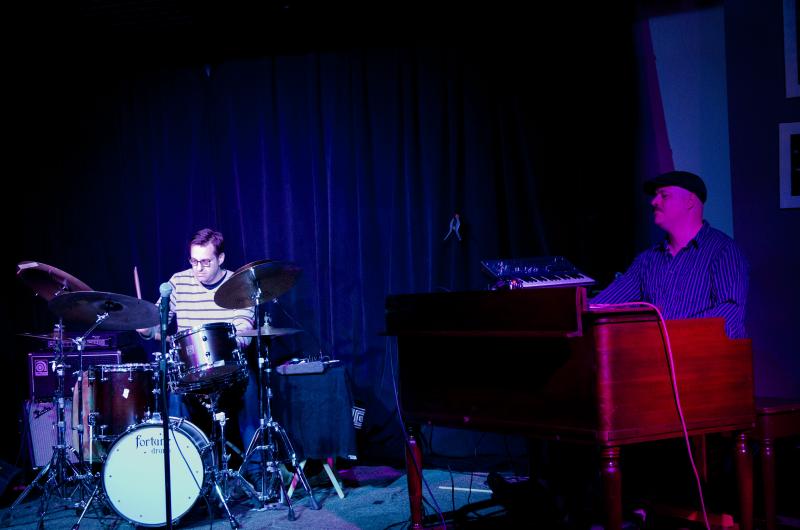 Taking the tried and true organ trio format and turning it on its side, Brian Charette's latest self-produced release is a mind-bending mélange of colors that is certainly one of the best recordings of 2017. Kurrent finds Charette in the company of drummer Jordan Young and guitarist Ben Monder, with each member of the trio adding electronic elements to the overall mix. In reviewing the album, this writer commented on how Charette seamlessly blends keyboard patches with his organ textures in a way that makes perfect sense and pushes the envelope in terms of what can be accomplished with such forward-thinking ideas.

In support of their recent release, Charette and Jordan embarked on a brief tour of several northeastern venues that included Cleveland's Bop Stop. In front of a small, but appreciative crowd, the duo managed to bring to life this challenging music while expanding on the vibe of such open-ended settings. For Charette, he employed the house's vintage B3 organ, along with some of his own keyboards and custom electronics. On top of the organ he placed a device that utilizes something known as circuit bending. Dating back to the '60s, this technique involves manipulations of an instrument's circuit boards in such a way that they misfire and create unique textures and loops. Jordan sported a larger than usual set up that included stacked cymbals, an Alesis electronic drum pad, and his own keyboard and vocoder. In referring to this departure from his usual bop kit, Young called it his "fusion" set up.

The duo opened the first of two generous sets with "Doll Fin," a quirky melody voiced on Charette's keyboards and supported by a repeating vamp. Young's vocoder and pitch bending via bent elbow on the snare added to the overall vibe created by this ethereal gem. "Time Changes" lived up to its title with the twosome hitting every twisted bend and turn and striking a more mainstream pose. By direct contrast, "Mano Y Mano" hints at Charette's taste for progressive rock of the '70s. It downright wailed in spots, with the lead melody being simply a rapid flourish of notes.

In acknowledging the experimental nature of the music, Charette teased with the audience by stating "this isn't your dad's organ group." Nonetheless, "Standing Still," written when Brian was seventeen, featured plenty of heavy grooving within the tradition. Even the frantic head of "Conquistador" gave way to a medium swing that allowed Charette to stretch out at length. The set closing "I Want a Little Girl" may be a jazz standard, but it too benefited from Charette and Young's contemporary focus and was made all the better as a result.

Following an introductory gambit for the second set that found Charette's smorgaboard of timbres including what sounded like a plane taking off and pitch bending sinewaves akin to the 70s soundtracks of composer Gil Melle, the pair settled in for the classy "Excellent Taste," a waltz-tempo number voiced with piano lead. Spurred on by Charette, Young offered his own solo statement organically developed over repeated riffs that then gave way to a more emphatic beat before gently cooling down for the melodic reprise.

One of the better known tunes by the great Larry Young, "Tyrone" received an attractive facelift from Jordan and Charette who by this point had taken things to the next level. Clearly inspired by each other's creativity and sense of inspired abandon, the duo had no problem balancing experimentation and electronics with more mainstream sensibilities and the results were highly accessible even as they were challenging. And one might even say a bit comical at times, a closing "The Shape of Green" essentially being a trippy organ rant kicked off by some churchy baroque sounds from Bach's era.