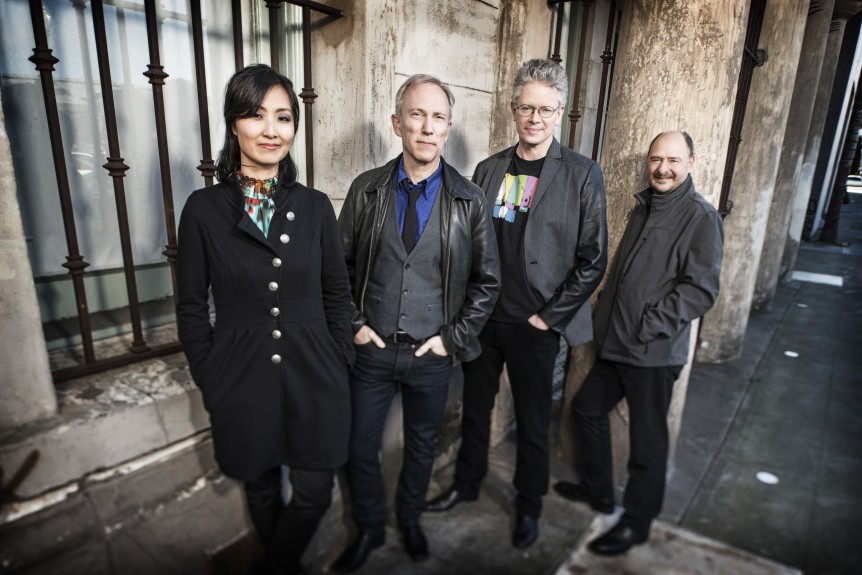 "I'd started playing string quartets when I was 12, and one day when I was 14, I was gazing at a map of the world and suddenly realized that all the quartet music I'd ever heard—Haydn, Mozart, Beethoven, Schubert—came from a single city: Vienna. A simple question came to me: 'What did music from other cities and countries sound like?' A door of curiosity opened to the world's music, and over the years, this door has opened wider and wider."—David Harrington, interviewed in American Impresario (2011).

A pop legend narrates a beat poem as his score is played by a string quartet. A Vietnamese musician plays exotic instruments. A string quartet mimics the sound of Inuit throat singing. Thirty-nine female vocalists in black gowns beat their chests. These are some of the scenes which took place on stage during one of the world's most unique festivals. A three-day musical bacchanal put on by Kronos Quartet, one of the planet's most unusual musical ensembles and organizations, Kronos Festival 2017 took place from February 2nd to 4th, 2017 at SFJAZZ in San Francisco, California. It included both Saturday and Sunday morning and afternoon performances by various ensembles, as well as three evenings featuring collaborations with Kronos.

Friday evening, the quartet's four members took the stage. Behind them stood their special guests: Nineteen students from the San Francisco Ruth Asawa School for the Arts who had been coached by jazz trumpeter and teacher Henry Hung. A majority of the students performed on clarinet, but a tuba provided needed oomph. "Grandma's House," a world premiere from guest Iranian composer Sahba Aminikia, employed melodies from a children's program aired during his childhood. Three movements from composer Trey Spruance's "Séraphîta"—precisely fingered and meditative and mournful at times—followed. Next was a spirited, propulsive arrangement by Jacob Garchik of Peter Townshend's "Baba O'Riley." According to Kronos founder David Harrington, the legendary rock song was inspired by both Townshend's guru Meher Baba and longtime Kronos collaborator, the 81-year-old Terry Riley. (Having worked with Kronos since the late 1970s, the minimalist composer Riley has composed more than 25 commissions for the quartet.)

A sprightly rendition of Mark Applebaum's "Darmstadt Kindergarten" engaged the audience. Cellist Sunny Yang, the quartet's newest member, schooled audience members in the composer's elaborate hand movements which they were expected to replicate at signaled intervals. As the composition came to a climax, each musician ceased playing, stood in turn and went through the requisite hand movements, until silence reigned.

Originally commissioned for a family concert, this lighthearted piece was followed by three spirited numbers by legendary Iranian vocalist Mahsa Vahdat. Vahdat, who is forbidden from crooning publicly in her native land, intoned with plaintive, poignant passion.

Following an intermission, Kronos played Indian violinist Kala Ramnath's composition"Amrit" ("Nectar"). Melodic and lyrical, it is one of the works commissioned for the quartet's exciting project "Fifty for the Future." This project places its commissions on the internet for anyone to download free of charge. Interest has proved considerable thus far: According to Harrington, the ten pieces available have been downloaded over 800 times by ensembles in 35 countries just since this past November. Ryan Brown's fast paced "Pinched"—another composition penned for Kronos and featuring hand plucking—came next.

It was then time for the evening's finale: Iranian composter Sahba Aminikia's "Music of the Spheres." This world premiere, a collaboration with ANIM, the Afghanistan National Institute of Music, featured the San Francisco Girls Chorus conducted by Valérie Sainte-Agathe and was. Each of the 39 black-gown clad young women simultaneously clapped their chests to percussive effect, as part of the performance. The standing ovation was followed by an encore.

The second night began with a stirring, energetic and yet stately rendition of Aleksandra Vrebalov's "My Desert, My Rose," as performed by the Dragon String Quartet of the Ruth Asawa School for the Arts. Vrebalov, a Serbian who moved to the United States in 1995, draws and sketches her musical concepts—in order to illustrate and chart texture, color and musician movements—before putting notes to paper. Sahba Aminikia's arrangement of Persian classical singer Mohammad Reza Shajarian and kamancheh-master Kayhan Kalhor 's "Rain" followed. Next, long-time collaborator Terry Riley was invited to the stage. He gave an exceptionally eclectic introduction to his "The Serpent Risdarome," employing only nonsense words. ("Not yet obvicacious or boliferant," it began.)

Nubian musician Hamza El Din's "Escalay" ("Waterwheel") followed, with the quartet attempting to mime the sound of the El Din's oud with considerable success. Korean composer Soo Yeon Lyuh's "Yessori" ("Sound from the Past") was next. Lyuh, donning an extraordinary gown, joined Kronos onstage with her haegeum, a screechy two-string fiddle, an instrument which has been popular on the peninsula for at least a millennium.

Following intermission, it was time to present a collaboration between two icons of the arts. Lawrence Ferlinghetti, founder and owner of City Lights Bookstore and publisher of City Lights Books, is best known as a poet for his poem "A Coney Island of the Mind." Van Dyke Parks, a Los Angeles musical icon who has worked with the Beach Boys, Randy Newman, Ry Cooder and other musicians, was attracted to the idea of composing to the lyrics of this poem because "Ferlinghetti is my ticket to ride." And ride he did—reciting with enthusiasm, while Kronos played his score, and even clenching his fists at times. Parks pressed his hands together at the end.

Then, Dan Becker's intriguing "Carrying the Past" sampled performances on 78s by trumpeter Eddie Sandson, his grandfather, some of them quite distorted.

Following a standing ovation, Kronos returned for "something that has become an anthem for us," Terry Riley's "One Earth, One People, One Love." Hearing Alice Walker talk on the radio about her "September 11 mantra" of the same name had inspired this composition, the concluding movement of his extraterrestrial-and space-oriented 2002-work "Sun Rings," another Kronos commission. Riley has described the eclectic, minimalist work as being "largely about humans as they reach out from Earth to gain an awareness of their solar system neighborhood. Space is surely the realm of dreams and imagination and a fertile feeding ground for poets and musicians." He went on to expound that "If only we will let the stars mirror back to us the big picture of the Universe and the tiny precious speck of it we inhabit that we call Earth, maybe we will be given the humility and insight to love and appreciate all life and living forms wherever our journeys take us."

The third and final evening's keynote was the world premiere of the remarkable "Knock" by Memphis-native Joan Jeanrenaud, the quartet's long-time cellist who left in 1989. The piece was inspired both by "the 'hard knocks' we have encountered together over the years" and "how the music kept us going." Jeanrenaud's piece, a sequence of which had the musicians 'knock' on the upper body of their string instruments, represents the challenges "each composer brought ... to express their ideas in sound and music." Orlando "Cholo" Valderrama's "Y soy llanero," an adaptation of a Colombian joropo (cowboy) tune, followed, and then it was time for the work of Canadian Inuit throat singer Tanya Tagaq. Kronos intrepidly took on the formidable task of rendering throat singing with strings in the form arrangement by Jacob Garchik of an excerpt from "Sivunittinns."

Following a lyrical performance of his composition "Pareeshān,"guest composer Sahba Aminikia invited "The Living Earth Show" (electric guitarist Travis Andrews and percussionist Andy Meyerson) onstage to perform a world premiere of his prose poem "Sooge Sohrab." Narrated by Nils Frykdahl and based on a 10th-century Persian epic, Aminikia relates that the piece was written "as a response to my own arrest, interrogation, and torture" in Iran during December 2012. Cacophonous, energetic and sometimes distorted with sampled vocals, it was not easy listening.

Following intermission, Vietnamese immigrant and multi-instrumentalist Vân-Ánh Võ took the stage to collaborate with Kronos. The initial piece, Jonathan Berger's "My Lai Lullaby," was followed by excerpts from Võ's "The Odyssey—from Vietnam to America." Võ, who has been playing the đàn tran (a cousin of the Japanese koto) since age four, is also a master of the dàn bầu. A one-string zither, traditionally played by blind musicians, the dàn bầu has more than a thousand-year history. Sporting a beehive hairdo, Võ employed the instrument to great effect, plucking its horn-like resonator to conjure a sound somewhat akin to that produced by a theremin. On the đàn tran, Võ showed her mastery; picks on the fingers of her left hand brought forth elegant notes. At one point, co-composer Harrington played a set large, cylindrical bronze drums while cellist Yang drummed a large, overturned saucepan. Võ also held forth on a wooden drum and later moved to stage center to play a gigantic bronze drum—one which appeared to be a replica of one of the Bronze Age Dong Son-era drum. Equally intriguing was the t'rung—a hanging bamboo-and-string xylophone. Võ's stanzas were evocative:

The quartet's longstanding commitment to social values was reinforced by its encore, a marvelous rendering of "Strange Fruit." This classic had its first incarnation as an anti-lynching poem. Songwriter Abel Meerepol (who published as Lewis Allen) then set it to music in 1937, and Billie Holiday made it into a classic. Onstage, Harrington maintained that, while he had wanted to play it since the group's formation in 1973, Kronos had not been ready to bring it to the stage until last fall.

It was worth the wait.