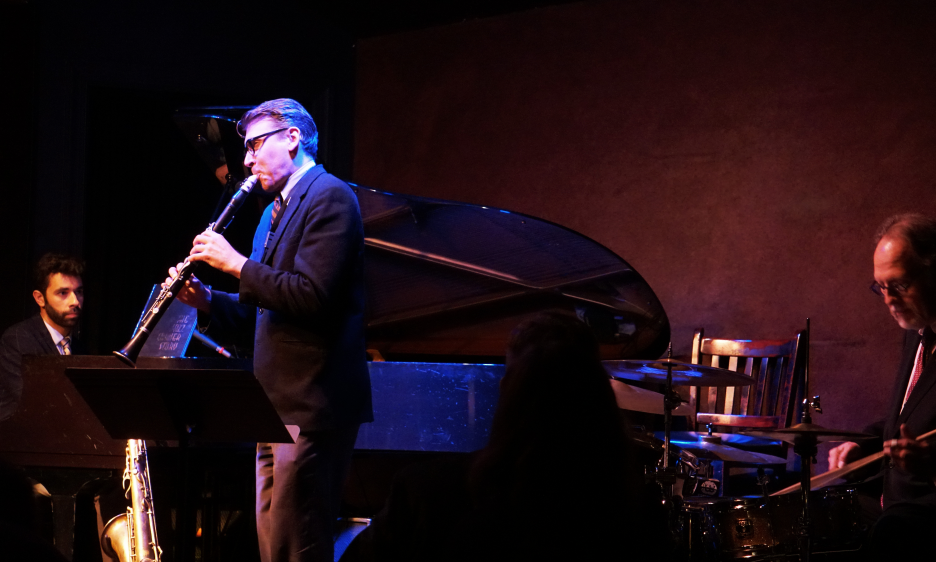 Kris Tokarski is a dedicated young pianist keeping the New Orleans and Chicago jazz traditions alive in a modern sophisticated style. His return to The Jazz Corner, where he first played at age 12, celebrated the music of tenor saxophonist Lester Young and clarinetist Pee Wee Russell.

Jonathan Doyle brought the reeds. Doyle is a player intrigued by the swing era while also composing his own up-to-the-minute music. Asked about his approach to this tribute, Doyle commented that "Both Pee Wee and Lester were developing throughout their careers. The swing era with the Count Basie Orchestra was the time we chose to spotlight for Lester. For Pee Wee, it was his early style" (though by the end of Russell's career he was on the cusp of avant-garde jazz).

Doyle physically bounces at the knees when he plays, with a heel twist in fast sections. He pushed the clarinet hard with beautiful phrasing, maintaining a light, plaintive sound while still playing firmly and rarely straining. Doyle's tenor saxophone was mellow but not rushed: a cool Lester Young style swooping into an exciting delivery. Doyle categorized his approach as a tribute to, but not a copy of, the two jazzmen.

Drummer Hal Smith lives deep in early jazz. Swinging rhythm were played quietly, with plenty of kick drum and hand-muted cymbals, as well as some tapping on the hi-hat with one stick below and the other above and military snare rolls. His sharp finishes delivered a final thrill to the end of each piece. Smith's brushwork was exceptional. Stick flourishes at the end of each section showed how much effort he was quietly putting into each piece. A controlled drummer, Smith sits nearly immobile over the kit, his signature round glasses giving him the look of a wise owl in complete concentration.

Traditionally, an early jazz record lasted just three minutes because that was all the recording time available back when records whizzed at 78 revolutions per minute. With tunes that short, a band can play a lot of music in each set. In Lester Young's cool tenor saxophone style, they played Gershwin's "Lady be Good," "These Foolish Things" from 1936 and Rodgers and Hart's 1928 show tune "You Took Advantage Of Me," closing the set with "Lester Leaps In," which Young himself composed based on the chord progression of Gershwin's "I Got Rhythm."

Doyle has close associations with both Chicago and Austin, two grand music cities. He switched easily between his two instruments and chosen styles, sometimes in the same song, for example on his composition "Bats on a Bridge," a reference to the bats regularly roosting under an Austin bridge. Doyle's fun tribute to Smith "Hal Yeah!" closed the first set.

Alone on the stand, Tokarski played famed Chicago pianist Joe Sullivan's ballad for his son, "My Little Pride And Joy." Dramatic repeated chords interlaced with a charming melody in Sullivan's music. Sullivan's health problems later on in life and inconsistency have unfortunately obscured his earlier brilliance as a pianist and composer. Doyle and Smith then rejoined Tokarski for Russell's tune "The Last Time I Saw Chicago," with Doyle playing clarinet and then switching to saxophone for the 1930 Billie Holiday hit "Them There Eyes."

The trio played cleanly. Short solos let the melodies shine through. There was none of the rawness sometimes heard in early jazz during this polished performance. This was a sophisticated presentation, set in the swing era and styled by Young and Russell's influence, but remaining the musical property of this exceptional trio.