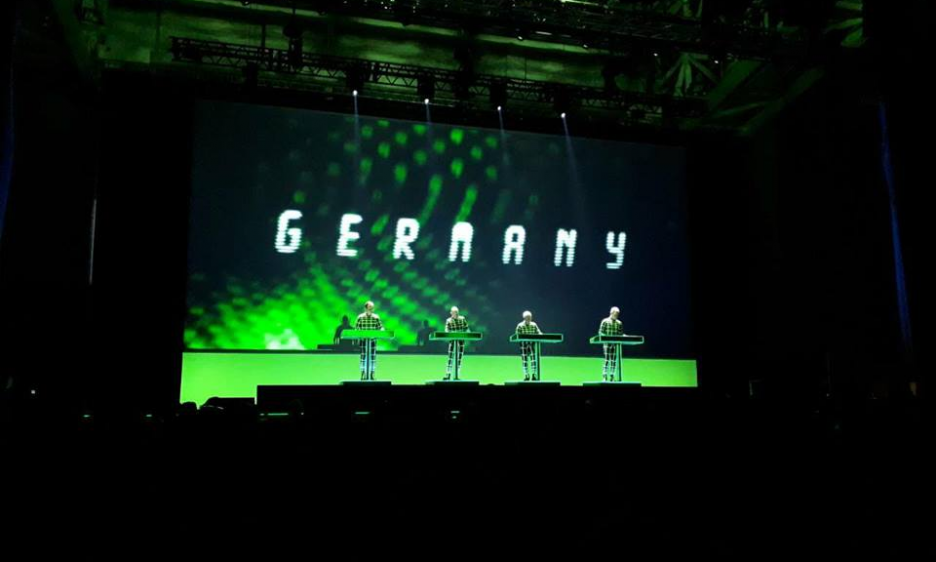 Definitely, we live in a world that was envisioned and shaped by the music and aesthetic created by the German band Kraftwerk. Ever since this enigmatic collective rose to popularity in the mid-'70s, it went to fashion a pure electronic aesthetic which encompassed all aspects of modernity. Each of their albums became a complete concept in its own right, from motorways to trains, from radios to computers and showcased the strong relationship between the people and their inventions. Over the years, each new phase was marked by a startling new image, a process which saw Kraftwerk move in the direction of cybernetics, by using actual robots on stage instead. This band's ideas, sounds, and imagination have enriched mine and many people's lives and have taken my senses into wild and uncharted territories of imagination. But to state that they are merely influential would be a colossal understatement. Not only are they responsible for some of the most important innovative electronic music ever made but they have achieved the rarely achievable balance between the experimental and accessible. The band has been decades ahead of everyone about the world we have inherited both musically, visually and technologically, and these visionaries from Dusseldorf have inspired and informed almost every musical shift in music over the last 40 years. Probably they are in the same rank as the Beatles or David Bowie as their work has caused a paradigm shift in contemporary music and culture and has branched out into other areas of life other than music.

The band's work in a live context has been no less groundbreaking and over the years their music and stage design have evolved to reflect this complex, interconnected and ever-changing world that they have predicted and envisioned decades ago. The concert in Skopje was one of the stops on the band's extensive world tour and with it, the concert's organizer kicked the first of several year-long series of concerts named as Taksirat 20. Seeing them for the second time (the first time at the Exit Festival in 2009 in a totally different setting) was a thrill as their music and performance have evolved further and it emphasized the ever-evolving nature and timelessness of their music.

In recent years, the band hasn't published any new material since 2003 with Tour De France Soundtracks and since then it began touring extensively with a re-arranged material. Firstly, they began with a complete run through of their entire back catalog by performing an album per night in its entirety at such exclusive locations such as MoMA or at Tate Modern. Last year, they released a live album 3-D The Catalogue which included a box set release consisting of these entire album performances and a 3D video, parts of which were screened during this performance.

What the band performed was Kraftwerk's reimagined classic opus aided by retro-futuristic 3D visuals. The audience was given a pair of 3D glasses to watch the visualizations that adorned the big screen behind the band members. The show opened with various hums, bleeps, and noises before a song was introduced. With the very first sounds of the song "Numbers/Computer World" it was immediately evident whose concert people are attending. There is something instantly recognizable about Kraftwerk's sounds and beats i.e. the character of their sonic identity is one of the things that has always separated them from the lot. The setlist consisted of Kraftwerk's classic songs such as "It's More Fun to Compute / Home Computer," "Computer Love" "The Man-Machine," "Spacelab," "The Model," "Neon Lights," "Autobahn" "Airwaves," "Geiger Counter / Radioactivity," "Electric Café," "Tour De France / Prologue / Etape 1 / Chrono / Etape 2," "Trans Europe Express / Metal on Metal ." The members of Kraftwerk, led by Ralf Hutter, played on neon-lit consoles and wore "Tron-like" neoprene body suits that glowed with LED lights. The four figures stood almost motionless behind their consoles where the equipment was kept hidden from view which in turn added an appealing sense of mystery to the whole event. All of these songs were performed in communion with various visualizations that gave an otherworldly feel to the whole event as the audience was presented with beautifully designed retro images of home computers, trains, flying saucers, autobahns, Volkswagen and Mercedes cars.

ADVERTISEMENT
Kraftwerk's music and images have always seemed as they have arrived from someplace else, from another dimension or from the future. Through the years, its otherworldly image and music may have given an impression of alienation and the synthetic nature of the sounds probably have caused debates of artifice. In fact, it's a music of the machine era, where by removing any trace of humanity from the music, any human emotion that is put inside it, will emphasize those emotions even more. And who would have thought that subjects in certain songs as "Computer Love" and "Computer World" might be more important now than before as it emphasized the strong relationship between a man and a machine.

The show was wonderfully synaesthetic as it mixed sound and vision. The songs are timeless classics and people responded rapturously when they were hit by their favorite song regardless if they were heavily rearranged. But most of the time they listened with great attention seemingly stunned into reverent silence. Even the responses on social networks after the concert were full of fun and images or there were debates as a response to environmental issues. The words of their songs which served as soundbites were put on screen to mesh with the images. The song "Radioactivity" has taken over another dimension and is now a warning to the damaging effects that nuclear plants and other facilities have on the environment and the people. It features a litany of nuclear sites such as "Tschernobyl," "Sellafield," and "Fukushima."

This extraordinary multimedia performance had moments of fun when the band introduced the robots on stage during the song "The Robot." The robots appeared on the stage with their hands stretched as if to embrace the audience. They danced enthusiastically to the beats emphasizing the harmony between machines and humans. There was a thundering applause during "Spacelab," when a flying saucer is first pictured flying over Earth and the city of Skopje and then actually "lands" right outside the venue. The show ended with songs such as "Aerodinamik," "Planet of Visions" and "Boing Boom Tschak / Techno Pop / Music Non Stop." With the last sounds of "Music Non Stop" each of them bowed out and in the end Ralf Hutter bowed and said "auf Wiedersehen" before he departed and ended the show.

All of these songs were rearranged and reimagined masterfully in order to bring them into the "now." Sometimes they strayed so far that these arrangements sometimes acted as mere configurations of melody, sound, and rhythm only to be given some kind of focus by bringing them to their familiar ground. These songs are maybe typical of the days when they were made and yet they are obviously undimmed by age or context. Kraftwerk's two-hour performance was a feast for the senses. It was the prime example of what classical composer Wagner has defined as "Gesamtkunstwerk" or an artistic creation that encompasses music, theatre, and the visual arts. This was a show by fantastically inventive musicians that have boldly explored the hinterlands of modern music for the last 4 decades.