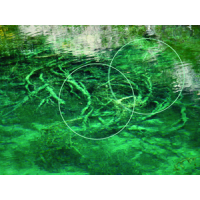 Kopfüberwelle features the duo of German flautist Sabine Vogel and The Necks' pianist, Chris Abrahams, uncharacteristically on pipe organ. Of the six tracks, the first five were recorded in May 2010 in St. Annenkirche in Zepernick and the sixth in June 2009 in Potsdam, where Vogel holds a university teaching position. The rationale for Abrahams' switch of instrument from piano to organ is explained by the duo's "explorations of both differences and similarities between the flute and organ." There are certainly more similarities to explore between flute and organ than between flute and piano; for instance, each consists of one or more metal pipes through which a flow of air creates sound, and they each produce sounds that can resemble vocalizations; at times, such similarities mean that the two can be difficult to tell apart.

The improvisations produced here exploit and play around with such similarities as well as the instruments' differences. The mood of the album is established by its first two tracks, each clocking in at eleven minutes. On "Roadless," both flute and organ employ long, sustained notes which interweave and harmonize to create a richly detailed, slowly evolving drone effect that is occasionally punctuated by slightly shorter, higher frequency tones which contrast the two instruments, adding coloration to the overall picture. There is very little evidence of melody, but none is needed to enhance a piece which is endlessly mesmerizing without, and further enhanced by the acoustics of the church where it was recorded.

"Handwriting" is just as good, but is completely different, structurally. It opens with a call-and-response dialogue between the two, with each producing sounds atypical of their instrument, including breathy notes and resonant popping sounds from the flute and tones from the organ which could almost be electronic in origin, but aren't. Slowly, Vogel's flute dominates the soundscape as she gives an impressive demonstration of her capabilities as an improviser, underpinned by subtle support from Abrahams, before the roles are reversed and the organist takes his turn in the spotlight.

That is a warm-up for "Luftleere Räume," which features another excellent organ solo; Abrahams' talent has already been established through his work with The Necks and his own solo releases, but Kopfüberwelle shows him in a new light. However, on an album without a weak or average track, the highlights are definitely those with a good balance between flute and organ; Abrahams and Vogel are well matched as improvisers and complement each other well; clearly this is a duo with a bright future.