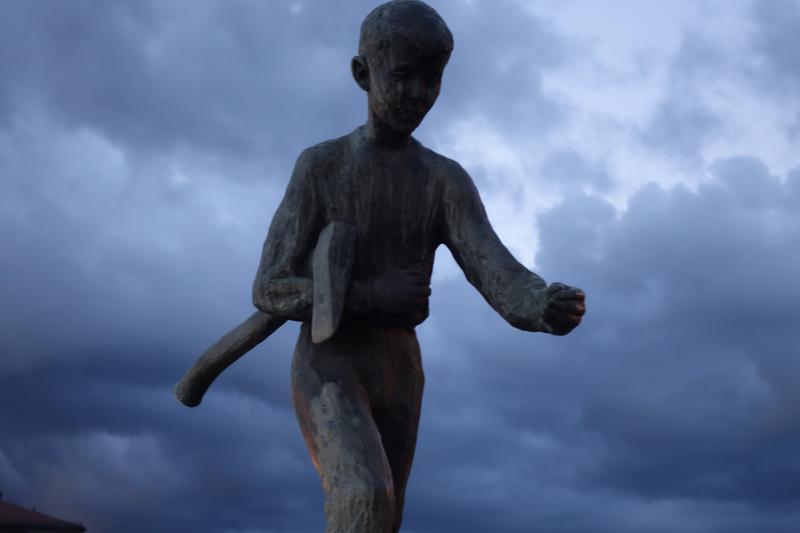 Kongsberg, a former important silver mining town, is situated in the eastern part of Norway 55 miles west of Oslo. The Kongsberg Jazz Festival, founded in 1964 has a long tradition of offering a specific program for international guests (presenters and media people) to get acquainted with/learn about developments of the Norwegian jazz scene. There was a special festival route of the meeting within the festival that focused on a selection of Norwegian musicians/groups plus a few from elsewhere too as e.g. The Chicago Art Ensemble. This year Ståle Liavik Solberg (1979), member of the program committee of Kongsberg Jazz Festival, gave the Kongsberg Jazz Meeting shape and appeal with a clear emphasis on freer forms of jazz. He did it in close collaboration with drummer Paal Nilssen-Love (both musicians are also organizers of the famous annual free jazz meeting Blow Out in Oslo). Solberg (1979) is one of the most colorful and dynamic figures on the scene especially in the way he combines a multitude of musical and organizational roles.

During the three days of the Kongsberg Jazz Meeting I got the chance to experience a selection of four vocal performances, covering a broad spectrum and each remarkable in its very own way: Trondheim Voices, Agnes Hvizdalek, Sissel Vera Pettersen (in a collaboration with percussionist Terje Isungset) and Karin Krog (in company of the two Englishmen John Surman and Howard Moody).

Directly after arrival I had to hurry to catch the performance of the eight-piece vocal ensemble Trondheim Voices (TroVo), unique in its kind and its evolvement as a collective since 2001. TroVo is Sissel Vera Pettersen (artistic director), Tone Åse, Heidi Skjerve, Silje Ræstad Karlsen, Anita Kaasbøll, Torunn Sævik , Mia Marlen Berg and Live Maria Roggen. The group has just released On Anodyne, a vocal—drum work with Jon Balke's percussion group Batagraf based on Yusef Komunyakaa's poem from "Thieves of Paradise." In Kongsberg TroVo presented new work in progress making use of a new custom made electronic device called Maccatrol extending the possibilities of voice projection and control.

There are many possibilities to extend, magnify or minimize the quality and reach of the human voice that have been developed in our world's different musical cultures. As a break away from Western classical music different kind of extended techniques and modes of singing have been developed and applied to gain new ways of vocal expression. Electronic processing and manipulation eventually made their entrée. One of the famous forerunners is Steve Reich's "it's gonna rain" and his "come out to show them" from 1964. Extending and multiplying the voice (by looping) as well as interacting with its electronic projections is presently widely applied. TroVo itself however ís already eight voices! In their new work under the direction of Sissel Vera Pettersen TroVo work with a new, custom-made electronic device, the power controller Maccatrol, meeting the specific needs of just this ensemble. It has been fabricated by Asle Karstad, one of the great Norwegian masters of sound, artist in residence at TroVo in 2016 and regular sound designer of the group. The small device worn on the hip can be operated by each individual singer during the performance. It especially allows working with the performance space in special ways. It can relocate the voice's sound across the whole space such that you get migrating voices in a surround sound space (for further details see the links here).

Besides usual electronic manipulations TroVo work with the migration of the voices' sound, the physical movements of the group through the performance space and light design (by Pekka Stokke). The group members' physical movement through the performance space had been developed in earlier work in connection with a controller reacting on body movement. As a consequence the sound variation induced movement patterns vice versa—choreography of sound.

The new device opened new possibilities with respect to the emergence of the music from deep space, swirling through space, minimizing/maximizing voices' sound and curving/liquefaction of sound (see also the DrawNotes in the Slideshow). All could be experienced in the group's improvised performance. As a work in progress -working on dynamics, the aesthetics of diffusion and on the active perception of vocal music by the audience -it was a fascinating and stimulating experience that carried its listeners to a dreamland of the human voice in sound. The new work will be performed in November at Berlin's Memorial as part of Berlin Jazz Fest 2017 in collaboration with British pianist Kit Downes.

The vocalists of TroVo are not just singing in smart arrangements and sound designs. It is rather a way of life by and through the manifold colors and forces of the human voice in its environment. The group repeatedly engaged in longer lasting, deep immersion with their voices in specific locations as total experience. Staged performances are an effluence of it. When TroVo a few years ago gave a concert at Molde Festival at 7:00 in the morning in the park, it revealed that they had been "voicing" the park during the dawn hours before.

The voice only solo performance of vocal artist Agnes Hvizdalek at Galleri Åkern revealed as another unique experience that I would indicate as "the voices in the voice's voice." Hvizdalek 'travelled' along guttural trills, smacks and other voice/mouth components on a micro level, often sounding like birdcalls (of coots for example) or sirens and in a certain way de-humanized. The most fascinating thing maybe was the killer precision and concentration she produced, combined, layered, synchronized, and arranged these spectral sounds during her performance. Through her focused inward concentration the performance seemed almost non-expressive outwardly, which actually increased the tension and fascination: is this inside us/me too? It was a clear-cut, boundary pushing performance and an extraordinarily engrafting experience.

Originating from Vienna's experimental music scene Hvizdalek has been based in Oslo since 2008. She has been involved in numerous cross-disciplinary collaborations merging voice and visual and performance art, dance, theatre, film, and writing. She recently joined the Norwegian musicians' collective Nakama and the ensemble of the same name with violinist Arian Løseth Waade, pianist Ayumi Tanaka, drummer Andreas Wildhagen and bassist Christian Meaas Svendsen. Her recent solo album Index has been released by Nakama. She also performs in the Demi Broxa Duo with Austrian bassist Jakob Schneidewind.

Sissel Vera Pettersen is a multi-talent: she is a vocalist, saxophonist, electronic musician and visual artist. Drummer Terje Isungset is known for his seminal role in developing ice-music and glass music (often together with trumpeter/vocalist Arve Henriksen) as well as for his musical use of stones, wood and other nature materials in his music. The duo just released its first album Oase on All Ice Records.

The duo's music is primarily just happening like sounds in nature. There was mostly no regular (steady) beat or forward rhythmical progression. In that sense it was (like) an open landscape full of a vast diversity of sounds, sounds of the wind, trees, leaves, birds, rolling stones, frogs and other animals with moments of dramatic accumulation. With eyes shut the source of sound was sometimes difficult to discern: was it processed voice, rubbing a stone or sanding a skin? Gradually the sound universe became populated by yells and whispers from the hideout of a swarm of ghosts and spirits. It was primarily real time creation of a strong ambient character. It sounded like a (fairy)tale, an epos populated by strong mystical figures in action. Vocals were carrying a wordless narrative about bursting, clashing and swirling forces by chant-like elements but often 'only' melodic nuclei flared up as golden flashes in the swooshing, tumbling sounds. It is a new musical partnership in progress that left a strong mark.