By JOSEF WOODARD
July 22, 2011
Sign in to view read count
Kongsberg Jazz Festival
Kongsberg, Norway
July 6-9, 2011
By now, it's a self-evident truth that Norway has become something of a hot spot on the global jazz map... again. This is hardly a late-breaking news sensation, given the long arc of jazz lore and fanaticism and support systems in place in this Scandinavian corner, not only in the care and feeding of its own jazz musicians but also the strength of the Norwegian festival scene. Molde celebrated its 50th anniversary last year, a formidable number in the still relatively-young shelf life of jazz festival culture, and the mighty mid-sized Kongsberg Jazz Festival—widely considered just behind Molde in terms of importance among Norway's jazz fests, and one with a sturdy reputation for its avant-garde leanings—isn't far behind, closing in on its own 50th in 2014.

Like Molde, the Kongsberg festival heeds the bold, workable festival model of annually taking over its humble small hosting city, in the most benign, cooperative and mutually beneficial way. Kongsberg, a ninety-minute journey east of Oslo, is a town born of silver, discovered in 1623 and mined through the 1950s, and currently is known for its industrial strengths in weaponry and technology, not to mention the long-time host of one of Norway's great jazz festivals.

And then there is the river, a powerful and poetic force rushing through the middle of the city and helping to define its character. The Numedalslågen river roars beneath a central bridge separating two sides of town, and becomes an inherent part of the spirit and the cartography (to borrow Arve Henriksen's album title) of a festival goer's experience here. You move from shows in the brick Energimølla (Energy Mill) club venue or the theater space in the Kongsberg kino, proceed across the bridge to the luminously beautiful 18th century Kongsberg kirke, next to the Tubaloon.

As festival programming goes, something special this way comes in Kongsberg, a festival which craftily satisfies multiple specific appetites within the jazz constituency, and particularly the taste of avant-garde and free improvisational sounds. In the latest festival edition, this year's heroes, from that outside-leaning world: veterans saxophonist Peter Brötzmann and bassist Barry Guy, and, from a generation down, Norway's own drummer of note, Paal Nilssen-Love, all presented in different settings and venues.

For this listener's money, the most ear-opening show, and the most riveting "aha" moment, came when Nilssen-Love demonstrated his uniquely expressive way of dealing with the challenging context of a solo drum performance. In the space of 25 minutes, N-Love summoned up delicate narratives, painterly textural adventures and well-placed bursts of drum kit powerhouse-ing, in the cloistered haven of the Smeltehytta venue, down by the river. 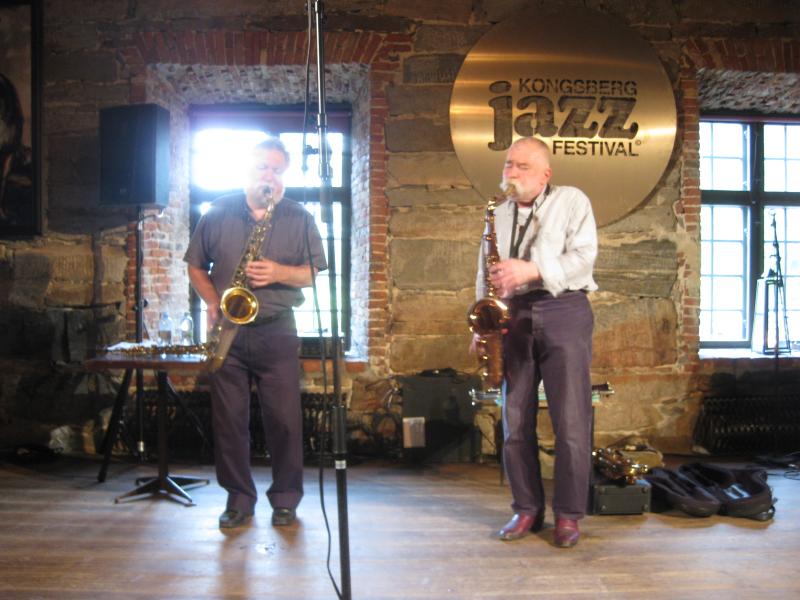 In that same strange secular sanctuary of a room, we also caught the pummeling winds of a rare duet with free jazz sax legends Brötzmann and Evan Parker, and an intriguing, surprisingly successful Baroque-meets-contemporary jazz meeting of bassist Guy and his wife, Baroque violinist Maya Homburger. In another memorable afternoon encounter in this room, Brötzmann gave one of his bracing—but also occasionally ruminative—solo sets, cutting the image of a roaring lion in lamb's clothing, or vice versa. It somehow served as analogous to the great river outside, a force both awesome and meditative, by turns.

On the same afternoon triple-bill called "Avanthagen" (translating roughly to "Avant-garden"), the proudly old school tape recorder/mixer magician, French experimentalist Jérôme Noetinger worked up more of the abstract but visceral, anti-digital soundscaping with literal tape loops and machinery, and, thankfully, no laptop in sight (we'd heard him work his magic earlier, in an interactive improvisatory trio with drummer Will Guthrie and saxophonist Jean-Luc Guionnet). Also in the "Avant-garden," the bill, the captivating experimental vocalist Sofia Jernberg and cellist Lene Greneger were sympathetic and highly sensitive sonic event-sculptors.

Meanwhile, in the city's lovely old church, such current Euro-fest circuit-makers such as the duo of Brad Mehldau and Joshua Redman and Charles Lloyd's New Quartet held forth, savoring the tailoring to the venue's reverential ambience. The Redman-Mehldau duo is a fascinating study in contrasts and a case of the former sideman showing up the former employer: while Redman essentially gave the pianist his first important gig, years back, Mehldau is a much deeper thinker and player than the saxophonist. While Redman's solos were fine and virtuosic, borrowing from the right sources and punching the right crowd-pleasing buttons, Mehldau's solos repeatedly plumbed new depths and took on a new character, time after time. Still one of the most exciting voices in jazz, Mehldau is on a roll at the moment, refusing to lapse into formula and experimenting with new notions of pianism. It behooves us to stay tuned to his evolving artistic story. 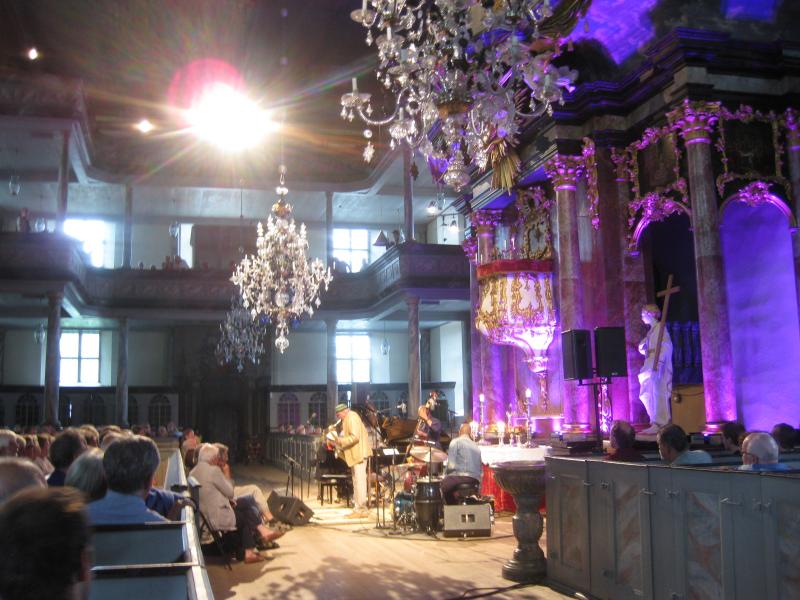 On the next evening, Lloyd's innately reflective, determinedly light and lyrical post-Coltrane quartet stylings nicely suited the room, as expected, from his more jazz and gospel-hued fare to a Brian Wilson's great song "Caroline, No." As has been reported, Lloyd's current line-up is one of his best yet, with versatile piano dynamo Jason Moran joining the supple rhythmic foundation of bassist Reuben Rogers and the band's real anchor, drummer Eric Harland. Despite the strengths of the group, we get the sense of repressed potential and reports from a feistier dynamic in this band. Balladic and impressionistic smoldering is nice, yes, but more burning, please.

Just behind the church, moving from the sacred to the populist profane, the large outdoor "Tubaloon" compound pumped out groovier goods. (This stage is one of the festival's most important money-generating components, which helps fund the more obscure and artful elements in the program, but which suffered the sogginess of unseasonable rain this year). Under the epic-scaled inflatable "Tubaloon" edifice over the stage, we heard famed progeny acts—new, next generation Afro-beat leader Seun Kuti & Egypt 80 and blues singer Shemekiah Copeland—and the closing night was a cross-cultural summit of fringe rockers, between the mesmerizing yowl and simmer of the Norwegian band Motorpsycho and fluke hit American alt-rock sensation Primus. Primal forces met jamming atmospherics and controlled psycho tendencies, to the delight of a bobbing and thrashing umbrella-wielding crowd.

As it happened, rock met and mutated jazz in fascinating ways at this festival, from the intricate but also righteously rough-edged Chrome Hill to the distinctively, sonically raucous Zu. In this setting, Zu, rocking the Energy Mill house at midnight, was a double-barreled group combining rock rhythm section (with Nilssen-Love sitting in as a sub drummer, to refreshing ends) and double bari-saxophones, compounded by the gusty guest from Sweden, Mats Gustafsson.

Most of this offbeat brand of jazz took place off the beaten path, poetically enough, on a side street paralleling the august river. Det Lille Extra is a historic (and according to some reports, formerly haunted) large house turned restaurant and conference house, where packed houses were regaled with music of ferocity and detailed nuance. From the former category came Brötzmann's dazzling and new-ish out-rock-jazz furnace of a trio, with Nilssen-Love and bassist Massimo Pupillo, while the latter, subtler mode of free playing was epitomized in the organically manipulative Will Guthrie trio show, and also a limber, listening-centric, and mostly British fearsome foursome, with Guy, Parker, drummer Paul Lytton and pianist Agustí Fernández.

Those same musicians, plus more, gathered to more than fill the stage of the Energy Mill for the Barry Guy New Orchestra, here with eleven players. In this outfit, Guy is the benevolent commander, composer and regulator of dynamics and the degrees by which structure and freedom should be heeded. The set deftly blended smart written passages with free blowing and gamey improv-guiding tactics, using numbered flash cards. Guy has some compelling ideas on the open-ended question of how to make free/non-free music swing and roar.

After midnight back at the Kongsberg kirke, percussionist Marilyn Mazur led her multi-cultural-wafting Celestial Circle band—with bassist Anders Jormin, pianist John Taylor and the alluring, unpretentious Swedish singer Josefine Cronholm—through some pleasant paces into the wee hours. It seemed a mild-mannered, odd-metered and atmosphere-loving benediction to a festival whose greatest strengths, from its semi-secret cache of free improv potency, were coaxed up on the spot. 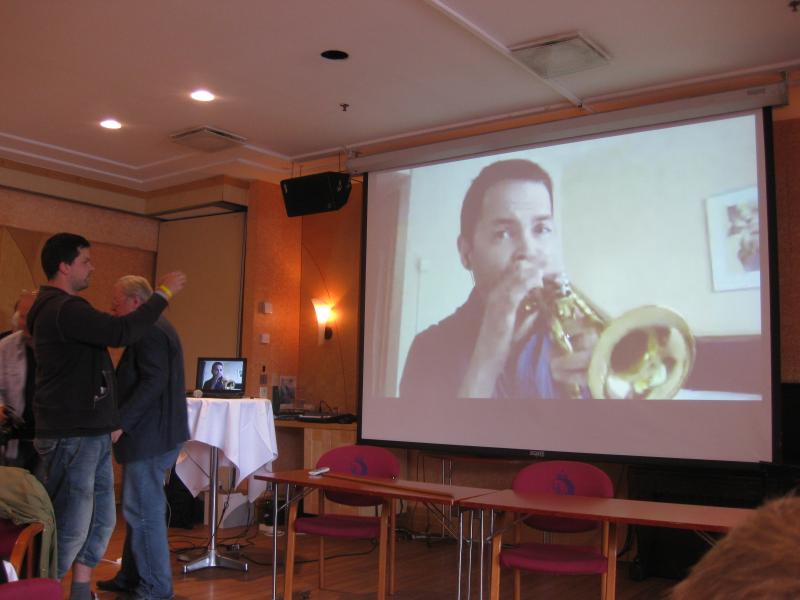 As a harbinger of things to come, the festival's annual presentation of its annual DnB-NOR award went to... Arve Henriksen, that acknowledged front-runner of the present "new" Norwegian jazz movement (although he's been making waves and honing his liquidy trumpet sound, for two decades, mostly in sideman roles until recently). Press and sundry VIPs had gathered in a conference room overlooking the river to toast, and do the presenting honors. Henriksen, ensconced in Rotterdam for another award and a North Sea Jazz Festival gig that night, was unable to be in the hotel conference room, physically, but appeared through the surrogate, ghostly real time manifestation of skype on a large screen.

Henriksen spoke humbly of his gratitude for the award and pondered plans for the project he would work on, to be unveiled at next year's Kongsberg festival. He then played a sad-sweet tune on his pocket trumpet to end the session, a fitting capper and reminder of why we're all obsessively lured back to the well of jazz, and jazz festival culture.

Rivers, in culture and nature, keep rushing forward, barring any catastrophic interruption. May it always be thus.