By EYAL HAREUVENI
June 8, 2013
Sign in to view read count 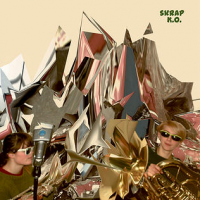 SKRAP ("scratch") was formed six years ago when tubaist Heida Karine Johannesdóttir Mobeck and analog synthesizer player Anja Lauvdal (also the pianist for Moskus, heard on the trio's 2012 Hubro debut, Salmesykkel), got locked together in a small room equipped with two bass amplifiers put up against each other. The Norwegian duo began experimenting with low frequency sound waves, looking for contrasts and similarities between their two distinct instruments.

These nuanced and brief interactions within the sound waves are the essence of SKRAP's debut, K.O. The duo molds, mutates and blends a spectrum of sonic occurrences that vary from minimal, silent and drone-tinged to dense, distorted and noisy, electronically enhancing the natural tones of Mobeck's tuba and Lauvdal's vintage Korg MS-10 synthesizer. Often this duo sounds closer to the dark metallic universe of American band Sunn O))), but most of the time its aesthetics are similar to the microscopic array of breathing sounds carefully employed by fellow Norwegian duo Streifenjunko.

These well-crafted collisions of sounds—acoustic, electronic and processed—have an accumulative effect. SKRAP has developed a rich vocabulary out of its incessant search for a new body of synthesized sounds, sequenced as a loose narrative that begins with restless, searching interactions and concluding with reserved, comforting tones. The duo's minimal deep-toned universe sounds like no other. Its highly unique and intimate interplay covers a range of moods from, the the disturbing to the evocative and dreamy- -even emotional, as on the closing "Grandama's Dream" and "Dunst Opening."

A challenging and engaging journey, within newly invented sounds.