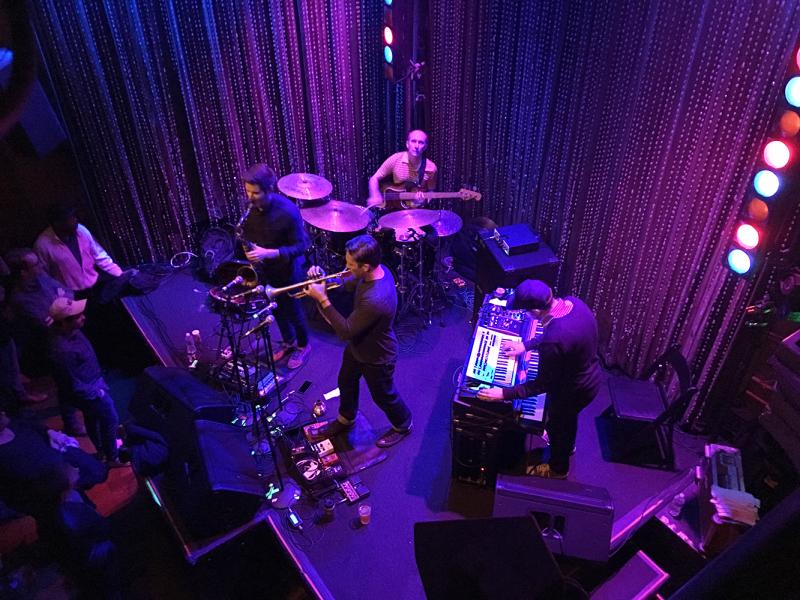 Generally when a band announces that a group member is waylaid and can't make the gig, those in the audience start to resign themselves to an evening of subconscious apologetics—("It's not the same but pretty good for a guy subbing on short notice." or "They're doing pretty well for being a man down.")

But this is Kneebody...

So when saxophonist Ben Wendel told the crowd at Johnny Brenda's that bassist Kaveh Rastegar was MIA for the night, the immediate disappointment was quickly turned into disbelief. "We are fortunate to have an alien in the band," Wendel continued. "Our drummer Nate Wood will be playing both drums and bass tonight. Yes, I know, we can't believe it either, but he can do these things."

As the quintet-turned-quartet launched into their set opener there was the added percussion of scores of jaws hitting the floor as few could process what they were seeing, (let alone hearing)—Nate Wood, superhero, drumming with one hand (and two feet) while hammering out notes on a P-bass fretboard with the other.

Anyone who has heard Kneebody knows that Kaveh Rastegar's musical contributions are as integral as they are substantial. This made Wood's adequacy in the dual role (and the undiminished satisfaction with the whole of Kneebody's performance this night) even more amazing. While there have been a few YouTube videos of Wood doing this, they are no match for the genuine spectacle live. If there were simplifications of drum and bass parts, they were more than redeemed by the perfect lock-in facilitated by Wood's single-brained rhythm section. There were indeed certain portions of the show where keyboardist Adam Benjamin took over low-end duties to give Wood the opportunity for full-limbed attention to the kit, but these were much rarer than one would expect. For nearly the entirety of the evening, Wood happily, incredibly, performed this small miracle of musicianship -leaving even his bandmates beaming with amazement. Aside from that, it was business as usual.

But again, this is Kneebody... and Kneebody's "business as usual" translates into something akin to no one else's.

Drawing the bulk of the setlist from their latest recorded offering Anti-Hero, the show made a strong case for this album arguably containing their strongest batch of material to date. Tunes like the infectious "Uprising" and "The Balloonist" easily got the crowd head-bobbing while slipping in enough musical umami to satisfy the pickiest of jazz eaters. And tunes built melodically on more jazz-oriented figures—namely the swinging lines of "Drum Battle" and the circular- breathing sax dervish that is at the center of "Still Play"—didn't dampen the crowd's collective shimmy. This is because Kneebody's accessibility is its anchor -and that anchor allowed for much more adventurousness on other levels than if it were absent.

Ben Wendel's saxophone, Shane Endsley's trumpet and Adam Benjamin's keyboards were all connected to substantial effects chains and their usage (in tunes such as the other-worldly "Carry On,"), while enough to make a jazz purist's toes curl, was always musical and much to the delight of non-purists and trance dancers alike.

As unlikely as it would be for a jazz purist to knowingly attend this night's Kneebody show, had any done so (and been able to suspended judgement), there would have been much for them to enjoy as well. Amidst the genre bending and signal blending, there was no shortage of purely inspired playing, deeply rooted in jazz. During his solo spots, it was easy to remember why Shane Endsley was long ago touted by Dave Douglas as a "leading young voice on trumpet." Likewise Ben Wendel supplied many moments on his instrument that solidified that same ranking for himself— among them a breakneck sax-and-drums-only jaunt (that brought to mind the McLaughlin/Cobham scorchers of the past).

As for Adam Benjamin, his creativity, deep facility and obvious jazz pedigree notwithstanding, the brilliantly unconventional keyboard approach and sound that is so at the heart of what he does might be hard for a traditionalist to see past -but that would be their loss.

And Nate Wood? Well, there wasn't ANYONE that could have been left unimpressed by Nate Wood this night...(!)

Indeed with superb musicianship, an artful balance of grounding and exploration, jazz tradition and modern deconstruction, they presented a performance that seemed to truly satisfy an audience comprised as much by 20-to-30- something hipsters and barhoppers as jazzheads and musicians. It's uncertain which group was more enviable. Was it the young crowd being exposed to these undeniably hip yet rich sounds that, for them, may be a gateway to a new and deeper musical world? Or was it better to truly know (and marvel at) how good these guys are to be able to combine their obvious wealth of jazz knowledge and facility with all sensibilities modern and distill it all into something at once fresh, visionary and remarkably accessible?

In the final analysis, it's moot because by all accounts, everyone in attendance at Johnny Brenda's this night was thoroughly gratified to have been there and heard this music performed live... (and witnessed Nate Wood, superhero)... (!)

...but after all, this was Kneebody.