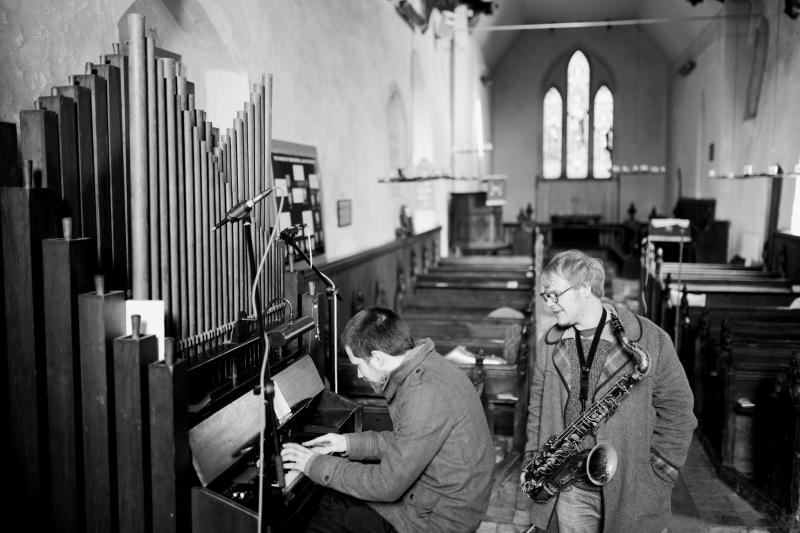 By DUNCAN HEINING
March 23, 2016
Sign in to view read count
Pianist-organist Kit Downes is one of the brightest and most articulate talents to emerge from the British and European scenes in recent times. His refusal to be pinned down to any specific career path or musical trajectory is to his credit but even more so is his ability to produce authentic music without compromise across style, genre or approach. Downes has that quality to his work that says, "Never mind the situation, this is me. This is my music."

From the jazz-rock of Troyka and his piano trio The Enemy to his remarkably mature playing on Thomas Strønen's recent ECM release Time is a Blind Guide and his duo Tricko with cellist Lucy Railton, Downes is a coming man. He has been so, since he arrived on the British scene with Empirical. At the time, some might have questioned his decision to leave a group just in the process of establishing itself. In practice, the decision has proven a sound one both for the pianist and Empirical, allowing both to develop their talents in new ways.

Downes' latest project was assisted by Aldeburgh Music's Open Space programme. It takes him into whole new areas, though the forthcoming album Vyamanikal with saxophonist Tomas Challenger was in some ways presaged by Wedding Music, the duo's previous download only release. Featuring Challenger on tenor and soprano and Downes on various church organs in the county of Suffolk, the music is as beautiful and emotionally moving as the project itself is both practical and whimsical. It was hatched in Huddersfield, has spread its wings at Aldeburgh and will shortly take flight at the annual Aldeburgh Festival in June and later this year in Cologne and at the Manchester Jazz Festival.

The pair met some ten years ago, Challenger tells me,

"We first met at the Glamorgan summer school, where I was working as an assistant in 2005. He must have been 18 or something—I was 22. After that, we worked together sporadically but maintained a strong link socially. We were always on the same page musically—I always liked his groups—and I remember we decided to solidify the partnership backstage somewhere in the RFH. We asked each other what we both wanted to do and both said we wanted to make some music that involved the organ. Then it was just a matter of making it happen—which was actually fairly easy!"

The result was Wedding Music, which began with a residency at Huddersfield University. As part of the project, they were allowed to record in St Paul's church with its fine concert organ, which is used for the Huddersfield Contemporary Music Festival. They recorded hundreds of minutes of improvisation, finally settling on some forty minutes that seemed to best represent their intentions.

However, they were also able to transform some of the improvisations into formal pieces and perform Wedding Music live using Hammond organ and keyboards in club situations, as well as playing a concert at London's Festival Hall on the venue's newly refurbished organ. The Aldeburgh project has grown from that through an extended residency courtesy of Aldeburgh Music, which the pair obtained "on the premise that we wanted to do a series of recordings at various local churches in the Suffolk countryside," Downes explains.

On Thursday 23rd June, as part of the Aldeburgh Festival, Downes and Challenger will take their audience with them in a vintage bus around the beautiful Suffolk countryside, performing the music in three of the churches used on the album. In fact, the project takes Downes back to his very first steps in music. As choirboy, Downes learnt to play on the organ of his local church in Norfolk, where he grew up. "The first thing I really learnt to do on the organ was improvise because I had a teacher who was very interested in that area," he says, "but not in a jazz style. It was more in an extemporizing sense of taking hymns or psalm themes but placing them in different contexts. Through my interest in that, my mum suggested I listen to Oscar Peterson. That was when I started getting more into the jazz thing."

At weekends and in school holidays, Downes would "hop on a train and play different organs around Norfolk," "organ-crawling," as he called it. With the support of the Aldeburgh Music programme, Downes and Challenger checked out a number of churches with notable instruments before settling on the six they used to record Vyamanikal.

"We went back and did two days at each church, so it was quite a lot of time," Downes says. "We whittled it down to about forty minutes including some overlaying of different tracks but the results are quite interesting. Some of the instruments like the famous Tamar organ in Framlingham and the one at Snape weren't necessarily our favourites. In a way, the ones in the smaller churches were essentially converted harmoniums that had all these bizarre little quirks because they are slightly buggered but we could do a bit more interesting things on them and create some wonky music."

For Challenger the idea of the project as a journey in every respect is crucial. "The location was really important," Challenger points out. "Trying out nine or ten organs and then recording on six was a real journey and the Suffolk countryside was amazing. We've tried to incorporate some of the journeying we did into this, so rather than hearing a saxophone and an organ in a church, like on Wedding Music, you will hear real spatial qualities to the recordings -snippets that are outside, two performances in two churches at the same time, the manipulation of microphones. It feels like you are moving as the song progresses."

And that is what Vyamanikal is. It is a record that has successfully exploited so many different musical aspects offered by the opportunity—from the instruments themselves, the acoustics of the churches, the position of microphones and the proximity or otherwise of the two musicians within those spaces to the highly developed improvisational abilities of Downes and Challenger. As Downes explains, it is also a project that can spin off in many other directions.

"The last part of the Aldeburgh project was that they gave us some money to expand some of that music out to a bigger ensemble," Downes continues. "So, we sampled some of the organ parts onto a keyboard and added a viol player, a cellist, a tuned percussion player, a violinist, Alex Bonney doing live processing and, of course, Tom playing saxophone and me playing piano and samples. So, it became an ensemble that we could tour clubs with but which didn't have organs."

In April, Downes and Challenger perform some of the music at the Cologne Philharmonic Hall with Lucy Railton on cello and Cologne-based drummer Jonas Burgwinkel. Then in Manchester in July, they will perform in St. Anne's church, along with some live film footage by documentary film-maker, Ashley Pegg, made in Aldeburgh. "So, every time we do a concert it has to revolve around the instrument and the space we're in," Downes says. "It means we can never export the exact same copy to a different venue. It always has to be quite site and instrument specific. By its nature, it is always changing."

It is a point that Challenger echoes. "Again, it felt like another natural part of the process of Vyamanikal," he tells me. "The music sounded great on the instruments present and it was nice to see the music showing its strengths despite the fact there wasn't an actual organ. It stood up by itself. Melodically, it was nice hearing the themes being shared around the ensemble and the processing really added a different spatial dimension than the natural acoustics of a church. The pacing was surprisingly easy—and this was such a joy to watch unfold. It's a buzz to see seven people all navigate music at such a slow tempi!"

I ask Downes how he would define the differences between Wedding Music and Vyamanikal. "The first album was recorded at St Paul's on this incredible concert-worthy organ," Downes replies. "As a result, the music is much more on the grand spectacular side of things, whereas this record was recorded on smaller, more humble instruments. Vyamanikal is more about the real fine detail. The nature of big organs like that is that you can't get mikes very close to them. They are too high or too massive to close mike. With smaller organs you can get inside them and record the sounds of the keyboard action or the air coming out of the pipes. So, you can be a lot more audiophile about the smaller instruments. That's what we've gone for on the second record."

Both are clear that the experience of working on Wedding Music and performing the music live was highly important in the development of Vyamanikal, as Challenger explains,

"I view that whole period—from the initial idea, to the first improvisations, to their consolidation and development as a giant process—one that was revelatory for me. I learned a lot about many areas—how we worked together, how we interacted musically, how I responded to the situations we performed in and, most of all, I really felt I learned about 'space' and all of its permutations. When it came to recording Vyamanikal I felt we had a strong concept of how we would go about creating some new music. During the time with Wedding Music, we had really honed in on things like duration, dynamic range, those melodic and harmonic subtleties that myself and Kit are fond of and playing outside of the twelve-tone equal tempered scale."

"Wedding Music was very much a free jazz kind of 'knees-up' in the area we are probably more versed in," Downes says laughing. "With this second album, we wanted to move it into a different territory, one that was a little more unchartered for us that was more about space. The big difference between the two instruments is that the saxophone runs out of breath, whereas I never do. That is the sort of spark we wanted to explore in the relationship between the two instruments."

It also seems that both records involve the exploration of several musical languages—jazz, free improvisation and contemporary or new music. And perhaps there is also a certain minimalist quality to the music in the way they use subtle, ambient modulations and the way the music seems to inhabit and move through space. The names John Adams, Terry Riley and Charlemagne Palestine spring to mind. It turns out Downes is a fan of all three and was lucky enough to hear and see the latter a few years ago in London.