By EDWARD BLANCO
December 24, 2011
Sign in to view read count 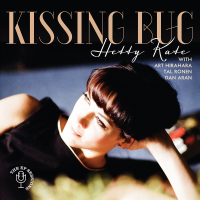 British-born, Australian-based vocalist Hetty Kate leads three bands in Melbourne, recording several albums of western swing and lounge-style music. Kissing Bug is her first foray into jazz, showcasing standards from some of her favorite composers, like Cole Porter, Harold Arlen, Johnny Richards and Billy Strayhorn. With only five tracks, the effort qualifies as an EP, serving as a preview and, as the press clippings state "a taste of more to come," intimating that this may well be a warmup to a full-fledged album in the future.

The project is the outcome of a 2009 visit to New York, where she joined pianist Art Hirahara, bassist Tal Ronen and drummer Dan Aran in recording this brief but superb straight-ahead disc. Possessing a soulful and sultry voice, Kate delivers an enthralling command performance that is both lyrical and appealing in approach. She captures the attention right from the opening 1954 Porter classic "All Of You," its sensitive swinging style supported by dazzling lines from Hirahara.

Kate turns the tables on "You Turned The Tables On Me," providing a fresh new arrangement to Louis Alter's standard, with Ronen and Aran taking center stage with a splendid interchange. A tender and passionate rendition of Strayhorn's title piece finds the singer simply at her best, accompanied well by the pianist's crisp chords. Swing is in full play on the lively "As Long As I Live," the vocalist sharing equally with her trio, which lays down some excellent instrumental work.

The Australian songbird completes her first session of jazz with an emotive treatment of Richards' immortal "Young At Heart," whetting the appetite for just a little more. Unfortunately, that's all there is on this teaser of a recording as vocalist Hetty Kate stakes a claim for some recognition as a jazz singer. Kissing Bug delivers a good start and a solid foundation from which to launch a jazz career, should she so choose.

All Of You; You Turned The Tables On Me; Kissing Bug; As Long As I Live; Young At Heart.