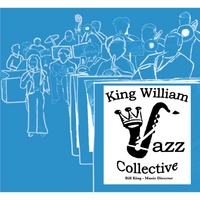 About four years before this splendid album was recorded, the King William Jazz Collective performed its first gig in San Antonio's historic King William district. While that alone could be impetus enough on which to hang a name, there's more, as the band's baritone saxophonist / music director happens to be King, William (at least in the telephone directory). He's better known as Bill King, and the eleven-piece ensemble he leads has since grown to be quite a snug and impressive group.

The Collective is comprised of two trumpets, two trombones, three reeds and a four-piece rhythm section, with vocalist Joan Carroll added on four of the album's dozen selections. In a band this size, everyone has to be an able soloist as well as a team player, and there are perceptive statements by all hands save bassist Bob Storck and drummer Darren Kuper who are content to stoke the fire while keeping impeccable time. Carroll, meanwhile, sings in a clear, "happy" voice that is pretty much free of pretense on "What a Little Moonlight Can Do," the Nat Cole hit "Too Young to Go Steady," "The Night Has a Thousand Eyes" (a personal favorite) and "A Nightingale Sang in Berkeley Square." Bill King is featured on "Over the Rainbow," pianist David Lopez on Sam Rivers' lyrical "Beatrice," trumpeter Logan Keese on Rodgers and Hart's ballad "You Are Too Beautiful." Each one acquits himself admirably.

Billy Boy; Syeeda’s Song Flute; Sweet Pumpkin; What a Little Moonlight Can Do; Too Young to Go Steady; Over the Rainbow; Beatrice; Tenor Madness; The Night Has a Thousand Eyes; You Are Too Beautiful; Eastern Blues; A Nightingale Sang in Berkeley Square.