By JOHN KELMAN
September 4, 2008
Sign in to view read count 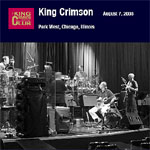 When it was announced, in late 2003, that touch guitarist Trey Gunn was leaving perennial art rockers King Crimson, to be replaced by returning bassist/stickman Tony Levin—a member of the group during its 1980s and 1990s runs—anticipation was high. Gunn's strength was as a virtuosic melodic foil for guitarists Robert Fripp and Adrian Belew as well as holding down the bottom end, but Levin has always been considered Crimson's ultimate groove-meister. When Porcupine Tree drummer Gavin Harrison was recruited in 2007 to work alongside existing drummer Pat Mastelotto in the seventh official incarnation of the group, for the first time in Crimson history it became an odd-numbered line-up that placed percussion equal to the twin-guitar line-up, with the bottom end to be managed by Levin alone.

The revived Crimson's 12-date August 2008 tour—a lead-up to the group's 40th anniversary in 2009—is also unique as the first time co-founder Fripp has reconvened the group to perform a set list focusing solely on existing material. The digital download-only double-disc set, Park West, Chicago, Illinois August 7, 2008, covers a broad swatch of material, culled from the 1970s line-up responsible for Larks' Tongues in Aspic (DGM Live, 1973) and Red (DGM Live, 1975) through to the nuevo metal of The ConstruKction of Light (Virgin, 2000) and The Power to Believe (Sanctuary, 2003). Still, Crimson has never been a backwards-looking group, and there's plenty new to be found on this two-hour collection.

"Warts and all," said Sid Smith, longtime Crimson documenter at the DGM Live site and author of In the Court of King Crimson (Helter Skelter, 2001), when he provided access to the download. Yes, there are some minor train wrecks during the 20-song set, but they only serve to make Crimson all the more human. Crimson has always been an improvising band to lesser or greater degrees, and while there are no lengthy improvs to be found, there are plenty of risks being taken, and a clear sense that, as always, Crimson on one night will be very different from Crimson on the next. That some chances work and others don't is what has always made Crimson's live performances the "hot date" alternative to its studio disc "love letters," as Fripp has often claimed.

Hearing the group moving "Sleepless," from Three of a Perfect Pair (DGM Live, 1984), away from its original, somewhat dated techno leanings, and into wholly modern territory—driven by Harrison and Mastelotto's combination of electronic and acoustic percussion and Levin's signature but subtly updated bass line—is worth the price of admission. Elsewhere, the pounding, Beatles-esque "Coda Marine 475," from THRAK (DGM Live, 1995) segues into an unexpected and lengthy soundscape exploration. Soundscapes act as introductions and segues throughout the set, with Fripp opening the show alone, to be gradually joined by the group, leading into one of three drum duos and a take on the complex "The ConstruKction of Light," where Levin still manages to leave his own mark despite the song's formal structure.

The perennial metal-esque favorite, "Red," has never sounded so aggressive, while the chaotic "Neurotica" is initially driven by a new kind of tribal rhythm, and entire vocal passages are replaced by powerful instrumentals. The dense "Level Five" is reinvented, with a double-kit attack replacing, at times, some of its original guitar parts, while "The Talking Drum," originally building from zero to infinity on Larks' Tongues in Aspic, starts more energetically and picks up from there, leading into a rhythm-heavy take of "Larks' Tongues in Aspic Pt II." Levin, Mastelotto and Harrison interact within the confines of its form, for one of the most exciting versions ever recorded.

Belew's voice is as strong as ever, though he does remain largely in the lower register on "Dinosaur," but with an increased edge that makes his rare leaps into the upper end all the more dramatic. More than the 2000-03 Crimson, Belew's guitar playing dominates, taking the lion's share of solos with reckless abandon. Still, Fripp remains a pervasive sonic presence, whether it's his expansive soundscapes, faux-mellotron intro to "VROOM," fast-strummed anarchy on "Indiscipline" or otherworldly tone of his solo on the funky fan favorite, "Elephant Talk."

Will this revived Crimson record new material? Or even release an official live set as an alternative to this clean-sounding "what you see is what you get" soundboard recording? So far, nobody knows except, perhaps, the group's inner sanctum. But until 2009 and King Crimson's 40th anniversary, Park West is a terrific document of Crimson's brief 2008 tour. Warts and all.