By BRUCE LINDSAY
October 20, 2010
Sign in to view read count 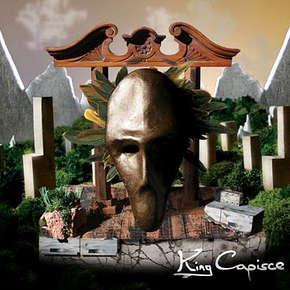 King Capisce hails from Sheffield, in the north of England—the home city of Joe Cocker, ABC and the Arctic Monkeys. On the evidence of its debut , King Capisce, this quartet's own lineage bypasses these rock and pop superstars and tracks back, instead, to Sheffield's more experimental bands such as Cabaret Voltaire and ClockDVA, with contemporary aural links to post-jazzers like Polar Bear, TrioVD and, most obviously, the electric bass and guitar sound of Acoustic Ladyland's fourth album, Living With A Tiger (Strong and Wrong, 2009).

The result of this mix is an exciting and dynamic sound which, while it has yet to find its own unique voice, is already hugely enjoyable and full of potential. It helps that the band, formed in 2008, is composed of four individually talented players who each bring their own musical perspectives to the mix.

ADVERTISEMENT
The tunes, all group compositions, range from high-energy workouts like "Cheer Up Cyclops"—led by Richard Harrison's raucous, rough-edged, saxophone—to quietly beautiful pieces. "The Rift" is one of these—a lovely, controlled, tune with terrific interplay between Harrison and guitarist Tim Feben, that builds slowly and effectively to a powerful climax. "Catastrophic Sex Music" also features Harrison's throaty sax tones, but takes most of its drive and energy from Feben's fluid and inventive guitar. Feben makes good use of effects here. adding to the mysterious and slightly scary atmosphere, with touches of invention reminiscent of early King Crimson.

The rhythm section of bassist Roshan Lal and drummer Tom Ashfield is impressively strong, particularly on the faster numbers. Lal opens "The Sharp End" with hard, guttural, low notes before Ashfield joins in with a complex, rhythmical pattern that hints at the influence of Acoustic Ladyland and Polar Bear drummer Seb Rochford. On "Between Teeth," where Feben's guitar sound takes on a distinctly bluesy tone, Lal and Ashfield hit a tight groove that locks down the tune perfectly.

Unusually, two tracks share the same title, pronounced, perhaps, "Ellipsis" or "Dot Dot Dot." Both are short, ambient, pieces on which Feben's guitar creates washes of sound. The second one is especially pure and dreamlike and leads smoothly into the two-part closer, "i Boundless; ii Reprise." Initially, Ashfield's dub-style drumming is high up in the mix, while the guitar, bass and sax sounds create a wash of delicate, mournful and contrasting sound. Gradually the instruments separate more distinctly, as Feben and Harrison trade increasingly powerful phrases as the tune heads to its climax.

King Capice operates at the junction of a wide range of influences, arriving at a sound that moves fluidly between jazz, rock and electronica. King Capisce is the product of a young group that is still taking shape—a strong, fascinating, debut that heralds the arrival of a potentially great band.