By MARK REDLEFSEN
April 7, 2012
Sign in to view read count 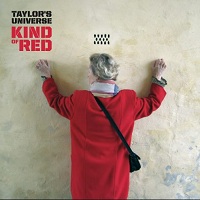 Leader of the band Taylor's Universe, multi- instrumentalist, composer, producer, and record label owner Robin Taylor hails from Denmark. With the title of his 30th release, Kind Of Red, Taylor cleverly tips a hat to the iconic album Kind of Blue (Sony, 1959) by trumpeter Miles Davis, and possibly also to King Crimson's Red (Atlantic, 1974). Taylor has had a number of releases under different banners over the last few decades. For all those needing to catch up, Kind of Red may serve as an appropriate introduction to Taylor and his music.

The music is primarily progressive rock and jazz with the overall unified feel of a film soundtrack. King Crimson, Van der Graaf Generator, and Jan Garbarek references are sprinkled throughout the eight songs on Kind of Red. Taylor plays guitars, bass and keyboards, but approaches his music more as a composer creating different layers and textures. Jakob Mygind (ss/ts)'s soprano and tenor saxophones bring out moments of Garbarek as well as Wayne Shorter and Michael Brecker. Rounding out the group, trumpet and flugelhorn player Hugh Steinmetz adds bright shimmering phrases, while drummer Klaus Thrane accents the songs with sharp, stop/start patterns and strong drum rolls, all the while showing the right doses of restraint.

"Firestone" opens with a flare of sax, guitar and keyboards before falling into a Crimson staccato pattern that builds and levels off. "Jakriborg," built around keyboard and flute, uses a lighter, circular form of repetition. "Crackpot Men" unleashes the full drama of the mellotron and organ with soprano and tenor sax pushing back hard against it. "Sunday Imagine" begins with a plodding patient beat. A recurring piano melody and intermittent phrases from the trumpet play around a symphonic rock melody reminiscent of Led Zeppelin's "Kashmir" or Killing Joke's "Pandemonium." "Salon Bleu" has an accessible vibe with celebrant sax alongside some Weather Report-like wordless vocals and keyboards. An unexpected tempo increase in the last part takes the idea elsewhere. "Tortugas" features several minutes of serene keyboards before kicking back into the chugging guitar and drum patterns of the opener. The closer, "Lost in Jakriborg," begins subtly before reprising "Jakriborg."

All in all, it is best to appreciate and experience Kind of Red as a whole. Taylor's meticulous arrangement and composition of the music almost demands it. Future new music from this Danish musician and his colleagues will certainly be welcome.