By JEFF WINBUSH
December 31, 2015
Sign in to view read count 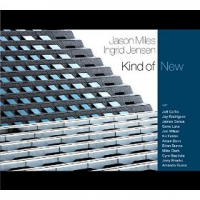 When your first or last name is "Miles" and you play jazz and you make an album dueting with a trumpet player and you call it Kind of New, you're opening yourself up to all sorts of assumptions and expectations.

Well, let's get those expectations out of the way. Kind of New is not an update, reimagining, homage or tribute to Miles Davis' Kind of Blue, one of the most quintessential jazz albums ever. Miles and Jensen are simultaneously looking over their shoulder at Davis as what's come before while looking ahead at what comes next.

That's kind of what this recording is. It kind of reminds you of one thing that is sort of similar while being its own thing which remains unique.

Clearly, Miles and Jensen want the listener to think of Davis, but Jensen is her own woman as a trumpeter and isn't attempting to imitate Davis. Jensen's playing is stylish, but not mannered, cool while remaining warm and open. Miles leaves the lion share of solo space to Jensen, mostly through three short interludes, but he is a canny and articulate keyboardist with the slinky opening of "Ferrari" offering evidence.

This is muscular music, all sinew and no flab with easy fake outs like covering pop tunes or blowing dust off the back pages of the Great American Songbook. Miles and Jensen's collaboration is one of 11 originals and a Wayne Shorter tune, "Sanctuary." Quite fitting as fate would have it because while Kind of New is firmly rooted in improvisation and spontaneity, but sonically it is more reminiscent of a Davis album Shorter played on; In A Silent Way , which Kind of New has much more in common with than its celebrated predecessor.

This is a superlative example of a creative team at the top of their games with inspired and memorable results. Kind of New will find itself on the favorites stack of any jazz aficionado weary of cash-grab collaborations which over-promise and under-deliver. Miles and Jensen pay it forward.