By JOHN BARRON
October 1, 2008
Sign in to view read count 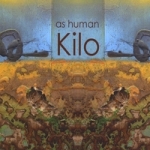 Ryat unravels her light-as-air, personal narratives rather effortlessly over the instrumental sonic wash created by guitarists Dion Paci and Tim Conley, bassist Jason Fraticelli and drummer Tony Catastrophe. The gently executed melodic turns on "As Hwuman" and "Fall Backwards" contrast brilliantly with explosive bursts of rhythmic intricacy. Other tunes of interest on the disc are "Pining," with a Primus-meets-Radiohead punch, and "Set Free," a more straight-forward rocker.

One of the strong points of As Human is the stunning, open-minded musicianship exhibited by each musician. Paci and Conley mix a punk-rock attitude with jazz-fusion sensibilities to create a thick, effects-laden guitar landscape. The glue that binds the seemingly unrestrictive nature of each tune comes from Fraticelli and Catastrophe. The rock-solid bass and drum duo are as soulful as they are aggressive, creating a hypnotic vibe throughout.

All in all, Kilo is a fascinating release, at times quirky and unsettling, yet highly inventive and worthy of repeated listening.

As Hwuman; Fall Backwards; All That We Have Said; Pining; Level; Spiral; Set Free; Heavy Heart; Ojai; Tap In; Obsession (with the sunshine).