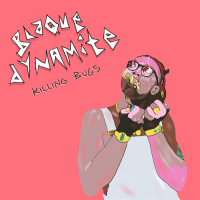 Child prodigies have been with us for hundreds of years. And yet they're still not fully understood. Loosely defined as anyone under age 10 who produces something an adult expert in that field would be proud to call his or her own, these rare kids don't always mature into greatness. For every Wolfgang Amadeus Mozart and Esperanza Spalding, there are one or two Scott Baios.

Mike Mitchell is headed in the right direction. His new album, recorded under the name Blaque Dynamite, is a deeply funky electric jazz tour de force.

Mitchell began drumming at age two, recorded his first live session at seven and was entertaining drum manufacturer endorsements at 11.

Three years later, he enrolled in the famous Booker T. Washington High School for the Performing and Visual Arts in Dallas. He graduated high school in 2013.

This one is exceptional, if not entirely even. There are moments, like "TDB" that push up against jazz boundaries with tight edits and looped samples. "Clapidgea" is another one. Electronics are put to work—relatively low in the mix, but they are there—that Sun Ra would have been proud of. If this album is any indication, Blaque Dynamite is out to mess with our favorite music.

Just the same, "Frlly" will appeal to traditional electric jazz fans. And tracks like "Doasaykeys" and "Tigergreen" are nicely in tune with label-mates The Pollyseeds.

There are a couple of hiccups on the disc. But they are the kind that come from a good place. Mitchell is an experimenter, a studio scientist in the tradition of Prince and Lee "Scratch" Perry. He's not always going to reach the heights he targets, but give him credit for aiming way up there.