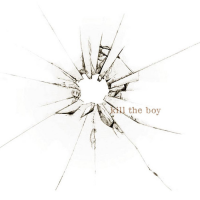 "Kill The Boy," title of Portuguese guitarist Joao Espadinha's first album, is taken from G.R.R. Martin's novel "A Feast For Crows," fourth in the epic fantasy series, "A Song Of Ice And Fire," which went on to become the immensely popular television series "Game Of Thrones."

But there is no violent medieval escapism here; no white walkers, no dragons, no raunchy sex. Instead Espadinha is intent on portraying his first faltering steps into the adult world. His approach is serious, the mood of the music lilting and introspective.

He started writing it during four years of study at the Amsterdam Conservatory. Then, on his return to Portugal, he put together the sextet featured on this album to play it.

Espadinha is content to keep his guitar in the background, letting his compositions do the talking, ensemble passages dominated for the most part by the bright and brittle sound of Spaniard Bruno Calvi's trumpet.

However, the leader allows himself to come to the fore on the title track with an assured solo that is dark in mood, contrasting nicely with the light, melodic touch of compatriot Joao Pedro Calvo on piano.

"Abano," meaning "shake up" in Portuguese, is the name of a beach at the resort of Cacais, near Lisbon, which is renowned for windy weather. The feel of it comes across in the ensemble passages and in a fine solo by Coelho.

There are vocals from Mariana Nunes on "6th Floor" and Espadinha's sister Joana on "Tema Para Um Fim," a song about endings. Espadinha says it can refer to all manner of endings but that, at its deepest level, it's about the closing of a chapter in his life.

The mood of the album is somewhat inconclusive, something that will doubtless change as Espadinha's career progresses. He is someone to watch out for in the world of Mediterranean jazz.