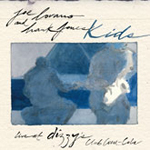 Joe Lovano is an old-school saxophonist, a throwback to the golden age of jazz. While he has, of course, incorporated modern innovations introduced by saxophonists John Coltrane and Sonny Rollins, as well as others into his style, his exuberant playing maintains a direct line through the history of jazz, incorporating swing, bebop, big band, and modal influences.

This explains the success of Lovano's recent quartet recordings with the venerable Hank Jones on piano (I'm All For You, Blue Note, 2004 and Joyous Encounter, Blue Note 2005). Despite the generation gap (Lovano is 54, Jones is 89), the two soloists exhibit a real affinity and respect for each other. Kids: Live at Dizzy's Club Coca-Cola cements their partnership and provides an enjoyable close-up view of their interaction in an intimate live setting.

The repertoire is nicely varied, including three tunes by Jones' younger brother, trumpeter Thad Jones (the stately "Lady Luck, the gently swinging "Little Rascal On A Rock, and "Kids Are Pretty People ); one original each from Lovano (the bop pastiche "Charlie Chan ) and Jones ("Lullaby, a gorgeous ballad); two jazz classics (smoking run-throughs of "Budo and pianist Thelonious Monk's "Four In One ); and several standards.

Jones has lost none of his elegance and plays with a gentlemanly dexterity that is best appreciated on his solo interpretations of "Oh, What A Beautiful Mornin' and "Oh! Look At Me Now! The closing tune, "Lazy Afternoon, is worth the price of admission alone, as Jones creates a dreamlike feeling of suspended animation underneath Lovano's high-wire soprano.

One could go on, but this would risk over-analysis of what should be a disc of pure pleasure—two jazz greats with over a century of experience between them engaged in a joyful, generous, and spontaneous musical conversation.