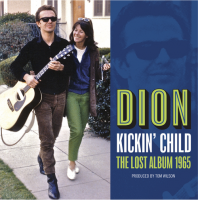 As much of a pleasure it is to hear Dion DiMucci's voice throughout Kickin' Child—and it is a great pleasure indeed even if you never traversed the path from "Runaround Sue" to "Abraham Martin & John"—there's no denying the all too obvious sources of the music. Even the cover photo hearkens to Bob Dylan's Freewheelin' (Columbia, 1963) career phase, wherein he first experimented with the accompaniment of an electric band.

And the transparently imitative nature of the recordings should hardly come as a surprise, since this record, subtitled The Lost Album 1965 , is part of a continuum including previous archive releases Bronx in Blue (SPV, 2006) and Bronx Blues: The Columbia Recordings 1962-1965 (Legacy, 1991). The overseer of all but three cuts here, Tom Wilson is the same producer who, without the knowledge of the artist, overdubbed electric guitars and a rhythm section on the otherwise acoustic arrangement of Simon and Garfunkel's "The Sounds of Silence," thus turning it into a hit comparable to other folk-rock pinnacles of the times, including The Byrds' "Mr. Tambourine Man," followups to which "Now" resembles more than a little too readily.

There are even more obvious precedents outside DiMucci's early oeuvre. For instance, his self-conscious vocal phrasing on "Kickin' Child," is an overt emulation of Bob Dylan in his transition from the socially-conscious folk troubadour to the freewheeling visionary that wrote "Mr Tambourine Man." "My Love" sounds like DiMucci was trying a re-write of "Love Minus Zero No Limit" and if he wasn't trying to telegraph his sources on the final track, "So Much Younger," he wouldn't have preceded that tune with Dylan's own "It's All Over Now Baby Blue," and thus drawn so direct a line to the latter's "My Back Pages." Dion cannot conjure the same gleeful abandon as the author on "Baby I'm In the Mood For You" and he strains for the off-kilter, humorous of "Subterranean Homesick Blues:" with "Two Ton Feather:" abstraction is not DiMucci's strong point.

Nor is he inspiring the musicians accompanying him here. This ever-so-careful reading of Tom Paxton's "I Can't Help but Wonder Where I'm Bound" suits the by-the-numbers compositional style: it's played in as rote a fashion as it's written. Meanwhile, the DiMucci original "Knowing I Won't Go Back There" is somewhat spirited in the accompaniment from the Wanderers-guitarist Johnny Fabio, bassist Pete Fasciglia and drummer Carlo Mastrangelo-but studio savant Al Kooper appears with this complement of players to further replicate the sound of The Byrds of the time with "Now" (and the absence of twelve-string guitar doesn't camouflage the intent or the end result).

It should be noted too that Wilson is the man who shepherded Bob Dylan through many of his studio sessions during this era, so it should come as even less surprise-Dion reportedly having been introduced to the blues by The Bard's other mentor, Columbia Records' John Hammond-that so much of the work here is purely derivative of Dylan, even apart from the direct covers of "Farewell," among others. The imitative transparency that permeates Kickin' Child is that of a musician, usually a fledgling artist in the process of cutting his/her teeth on roots as a means to discover a distinctive personal voice. Dion DiMucci's had already established such a singular voice by this time, based on his tremendous commercial success in the late fifties and early Sixties and it is to his credit that, apparently introduced to the blues by Columbia Records executive John Hammond, he was earnestly moved to pursue a different artistic direction. In his thorough liner notes Scott Kempner suggests, perhaps unintentionally, that the intent of this collaboration wasn't purely artistic, but an equally mercenary means to revive a career.

And yet, apart from those cuts, if it were not for preconceptions based on DiMucci's previously established image, this work might well have been better received at the time, even if it sounds ever so calculated now: therein, no doubt, lies the reason that it was never released under the Columbia Records aegis and now comes out on the niche/specialty label Norton. All that said, any musiclover who dotes on this particular style from the mid-Sixties is bound to relish Kickin' Child -The Lost Album 1965 , simultaneously savoring Dion's fulsome, effortless singing as a major component of that pleasurable sensation.

Kickin' Child; Now; My Love; I Can't Help Wonder Where I'm Bound ; Wake Up Baby; Time In My Heart For You; Tomorrow Won't Bring the Rain; Baby, I'm in the Mood For You; Two Ton Feather; Knowing I Won't Go Back There; Farewell; All I Want To Do Is Live My Life; You Move Me Bab; It's All Over Now Baby Blue; So Much Younger.