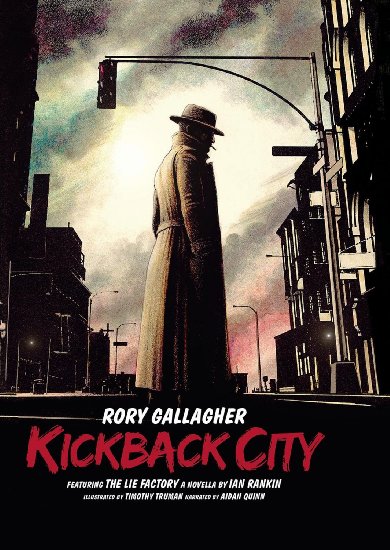 Notwithstanding titles such as "Deluxe Edition" of Irish Tour '74 (Legacy Recordings, 2014)or the almost equally splendid archiving that is Notes From San Francisco (Eagle Rock, 2011), Kickback City Deluxe Edition is the most distinctive entry in Rory Gallagher's discography. Two collections of studio and concert tracks highlight the detective mystery theme running through Gallagher's later original material, all of which music relates to the graphic novel with which it's packaged.

Housed within this a 5.5"x7.5" hardcover book are the aforementioned discs, another CD containing actor award-winning actor Aidan Quinn's reading of by Ian Rankin's pulp fiction novella "The Lie Factory," the text of which renowned graphic artist Tim Truman illustrates in striking fashion a la the four black & white postcards enclosed within as well.