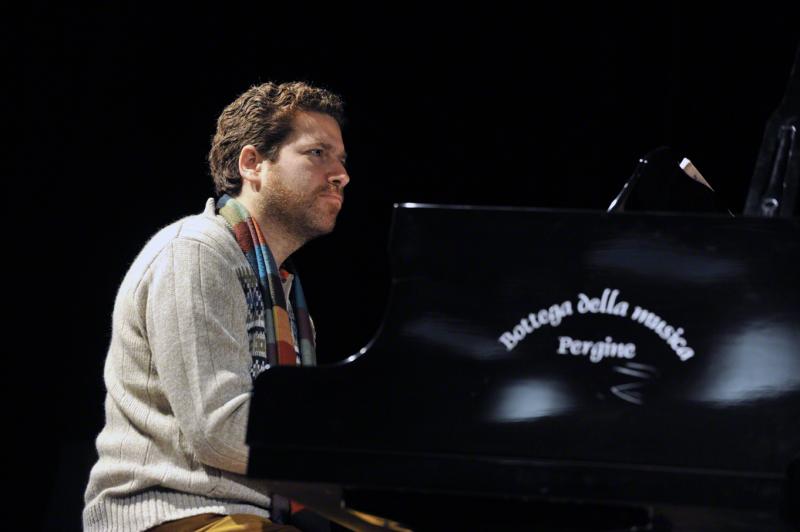 If you aren't familiar with pianist Kevin Hays, you should be. He's recorded and toured with many of the greatest jazz musicians of all time. And those who call him can't seem to get enough of him. His recent projects as a leader on Artistshare have been stunningly beautiful. I've been a fan ever since I came to New York. I heard him with Eddie Henderson's band many times, and I heard him with many other projects, including his own. I caught a bit of his trio set at the 55 Bar in New York in August and asked him if he would do an interview for Jazztruth. He said yes and we agreed to meet in Central Park on a lazy summer afternoon. Hays was very insightful about music, in a philosophical way, but also in a very practical way. I found the interview to be most illuminating. (Note: It took a long time to find the time to transcribe this. I had to hide in various rooms of my apartment to focus on it. Sorry, family!)

George Colligan: We are here with Kevin Hays—jazz pianist extraordinaire, composer, and vocalist? We might discuss that at some point.

Kevin Hays: [laughs] We might dispute that at some point!

GC: I just want to say right off that I'm new at this, so it's pretty loose. I don't edit much and I like to let people talk as much as they want. I think that's what the real fans want, they want the real information from the musicians, not just "Musician X has a new CD out, blah blah blah...."

GC: So be as candid as you want. If you wanna dish, dish! OK...What are your earliest memories of your musical life? As far back as you can remember. What made you want to become a jazz musician?

KH: Well, my earliest memories are of my father playing the piano. He was an amateur pianist. He would plunk through some standards now and then. So I would hear him on the piano we had in the house. I remember watching him. Sometimes he had some broken "stride" piano stuff happening, which I liked. That's probably my earliest memory—the first music I heard. There [were] also records played in the house. My parents had some George Shearing records, and they had a Jimmy Smith record called Organ Grinder Swing.

GC: We were just talking about that record with Jimmy Greene!

KH: Yeah, it's so great, I remember "Satin Doll." And he had some Oscar Peterson. So those were the early jazz guys I was into. Now, I didn't immediately get really into jazz. I was into rock, and whatever was on the radio, some Barry Manilow! I was born in 1968, and I guess by the time I was 10, I was into various kinds of music. I'm the youngest of four siblings. My older brother was into some fusion, some YES, some Jeff Beck, and some prog-rock. I started taking piano lessons, some classical lessons, at a local conservatory in Westchester, although I grew up in Connecticut. So I got into it pretty young. And in my early teens I started really getting into jazz. And then there was a local jazz pianist named Lou Stein who used to play around—he was on some of the Bird With Strings recordings. So he would play at a local restaurant, and my father wanted to take lessons with him, and then finally I started to take lessons with him. So Lou Stein was my first real jazz piano teacher. And then I went to Interlochen Music Camp in Michigan for a few summers, and I took a "crash course" in jazz piano there, you know, voicings and basic stuff. And this was when I was really off to the races. I really got the bug then. I felt like I really was understanding the sounds I was hearing on recordings, you know, left hand voicings like 7/ 3/ 13, and it all started to make sense.

GC: How old were you at the time?

KH: I was around 14 years old. I was playing "Color My World" before that! So this was a huge eye-opener for me. I think one of the things that got me was the rhythm of jazz, the swing rhythm. I played drums a bit in junior high and my brother [also] had a garage band, which had a huge drum set, and I used to play on it sometimes.

GC: So you moved to New York when you were around 18?

KH: Well, I grew up about an hour from the city, so I had a lot of exposure to New York in high school. I actually started doing gigs in the city while I was still in high school. Bassist Sean Smith and I are good friends from high school and we used to come into the city together. We were actually in some rock bands together. And then I heard he was playing upright bass, and getting into jazz. [So] we started playing together a bit. He's a couple years older and there was a crew of guys that he was connected to who were going to LaGuardia School of the Performing Arts. Guys like alto saxophonist Jon Gordon, pianist Bill Charlap, and some others. I started hanging out with them, I became really good friends with Charlap, and I sort of followed in his footsteps by studying with some of the same teachers he had, like Jack Reilly, and classical piano teacher Eleanor Hancock. So that was my intro to New York. In fact, Charlap was playing a steady gig at Knickerbocker, and he was leaving the gig, so he got me on the gig. So I got to play at Knickerbocker while I was still in high school, which was really exciting. It was great also because Bradley's was right around the corner, and I'd get to hear all these great pianists all the time, like Kenny Barron, Roger Kellaway, and Hank Jones. I had to sneak in cause I was underage. I guess I shouldn't have even been allowed to play at the Knickerbocker as well! So it was very cool. Sean and I used to come into town and play with a guitarist named Dan Rockliss—who moved to Spain. We all went on our first tour of Europe with drummer Tony Moreno. I had been a student at Manhattan School, but when I got this gig, I split.

GC: So you never finished your degree?

GC: Do you feel like you missed out on something by not finishing your schooling?

KH: I think it's possible that I did. I was pretty headstrong—still am! [Laughs] I'm working on it. But I wasn't really a focused student. I pretty much did what I wanted to do and I knew I wanted to play and I really wasn't interested in much else. So I was kind of driven in that way. I sort of wished that I had paid more attention to my classes while I was there. Things like music history—I was so not there! All I cared about was "How do I get this feel together? How do I swing? How do I learn to comp?" No one was teaching me this! I did have some lessons with Harold Danko, which was cool. I was only there for one semester, so maybe if I had given it a chance...I guess you can pay a price if you are myopic and focused on only one thing. That means there's probably something you aren't learning, if you are only zooming in on one thing.

GC: So many music students now only go to school, and learn that way, because they can't go off to do a tour. There's not much of the apprenticeship system left, so most music students only have their school experiences to draw from. Can we agree that this is not for the best?

KH: I'm not sure if that is really the case! I mean, obviously young musicians can't apprentice with musicians who are no longer here (Art Blakey, etc...). But there are still opportunities. And they can get the information, maybe not from the first guy who created it, but from somebody else who has played with the real cats...

GC: Why shouldn't they apprentice with you?

KH: Well, yeah, I've played with younger musicians in a way that you could call an apprenticeship—learning from somebody who is older and more experienced. There are plenty of those guys around—yourself included. The information that you got from the older cats you worked with, it just streams right through you.

GC: Do think that the kids in schools are getting this?

KH: It's hard for me to say... probably not if you are really isolated. New York is different because there are so many of those guys around. I was fortunate to have played with Benny Golson when I was 23 andJoe Henderson when I was in my 20's. That probably would not have happened if I had not been in New York. But initially, I wasn't touring that much! I was just getting together with friends and jamming. I think that's probably missing more than the other things you mentioned. But then ultimately that weeds itself out in a way, because now you have so many guys in school who can barely play with a group, who maybe aren't up to snuff, in terms of being able to play with a group, or keep the form, or play a blues, or whatever. If there's one thing I think is lacking in the schools, it's the vetting process; it's a little suspect. It's like if you have the money to pay, you can go to music school. Some of these kids just aren't ready. It's hard for me to say how it's supposed to work.

But for me it was playing with friends. Sean Smith coming over to the house—I met drummer Leon Parker at a record store in White Plains, and then he would come over to the house and we would play. I was going to hear a lot of music in the city—not to sound stuck up about the New York thing, cause there are probably lots more scenes now then there ever were in other parts of the world.

KH: Well, let's just take Europe for instance. Do you think 20, 25 years ago, you could perceive anywhere near the same kind of jazz experience that you have now? I don't think so... you didn't have the level of guys that could play. There were some, but it kind of exploded!

GC: A lot of those guys studied here.

KH: Yes, but they brought it back home. What I'm saying is that if you don't want to go to New York, you could go to Munich and there would be a scene there. That wasn't the case two decades ago.

GC: When did you start recording for Steeplechase?