By GORDON MARSHALL
September 8, 2010
Sign in to view read count 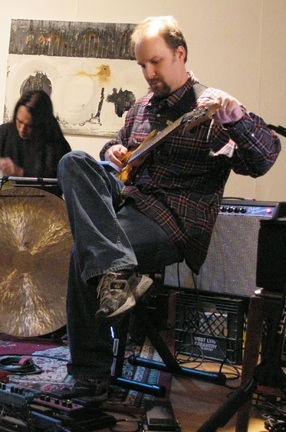 However cool the surface of his music, Kevin Frenette is not content to serve up any sort of "easy listening." The guitarist grew up in Fall River, a small city in southeastern Massachusetts, but the beauty of his music is akin to a sylvan setting—to enter into it is to traverse a forest trail. Some themes and motifs—"organisms"—are finely formed and highly developed; some are just budding—new ideas still in the rough, offered to the ear as tokens of innovations transpiring or to come. There are frenzies of activity, coolly psychedelic, and then dry turns—demanding terrain that challenges, but in the final analysis leads to greater triumphs and more difficult pleasures. There is always in it a knot to unravel, or to tie, for those choosing to take his path.

In a similar way, Frenette and his band members spool together their lines and splice them, and pull them apart again. To listen carefully to the music is also to be drawn into these plays of interlocking and combination—and ultimately to feel a part of nature, sometimes cool, sometimes dry, sometimes wild and wet.

All About Jazz: Tell us about the cover band you were in before you played jazz.

Kevin Frenette: That was something I was in for about ten years. I haven't been in it for about the past seven.

AAJ: So you must have been quite young when you started in it. Was it high school?

KF: It was in college—UMass Dartmouth. One of the guys I was in high school with, he was also at UMass Dartmouth and he was in the band first, before me, and when their guitarist left I replaced him. And for better or for worse, I was in there for ten years. But it was a good ride, and we made a lot of money during that time. We did a lot of gigging, something that was regular—four nights a week during the summer—and I was still working a full time job during the day, too.

AAJ: How did you go about deciding the music you played? Was it stuff you liked, or was it stuff the audience liked?

KF: It was all the audience. It was whatever was on pop radio. One of the guys in the group would give us a CD on Saturday night, and say, "Next Wednesday, have all these songs ready to go." So you had the pressure of having to learn five or six songs, without the benefit of any rehearsal together with the band, and then Wednesday night you had to be ready to play them all. But it was just whatever bubblegum stuff was on the radio at the time.

KF: A lot of Barenaked Ladies, a lot of Prince, U2—all the stuff that was popular and on the radio.

AAJ: What drew you to the style of what you do now? It's difficult; it's cool on the surface, but not easy listening. Why do that when you could be making more money doing rock or straight-ahead jazz?

KF: There's something about being in the moment, with other players who are listening so intently and trying to make this spontaneous thing happen. To compare it to being in a cover band—you're there to play the tunes the way they are on the radio, that's what people expect—while you're still feeding off the other guys, and there might be flashes of, you know, playing off each other, there's nothing like being in an avant-jazz band. I can speak to myself and I can also tell it's happening with the other guys, but I'm trying so hard just to dovetail with them and just make music happen—make something that's really going to push forward. To me, there's so much to play in that kind of music.

When I went to college, I wanted to learn to play the guitar the best I could. And this music—it's the place. It's all about playing. And that's why I'm so interested in this.

KF: I'll say '94. It was right when I started going to college for music. Originally I had gone for accounting, and then I begged my parents to jump over. And I had a bunch of friends; we were all in the same track, and we started all together getting into jazz around the same time. And what we would do—we would buy The Penguin Guide to Jazz, and we would all have a copy of that giant book—you know, like The Bible—we would read that thing and—I'm forgetting what their highest rating is. I think it's the crown. So we would look through everything that had the crown and try to investigate that.

But it had a more logical track to it than that, where you'd always hear Charlie Parker, Miles Davis, Charles Mingus, so logically we'd flip the book to Charlie Parker, Miles, Mingus, and buy those records that were highly rated. And that eventually snowballed, until now you've got most of the Miles catalogue—or at least I did. Then you started moving into John Coltrane, getting all of that, and reading The Penguin Guide you would see the people who were related to that, and then you went to [Eric] Dolphy = 6340}}— 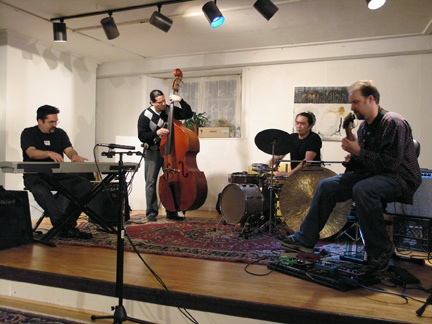 KF: Right. And the next person was Eric Dolphy. Through that it started moving out towards Anthony Braxton, things like that. Once we finally were really absorbing the Dolphy stuff, loving that, I remember one of my friends saying, "We're gonna go up to Boston to Tower Records," and I gave him 40 dollars, and I told him to get—It was one of those Anthony Braxton quartets on Leo, from the '80s, whatever one was highest-rated. He came back and we listened to it, and I said, "Wow! I don't like that at all!" I just couldn't connect with it, just couldn't grab it. And we put it aside and kept it there.

It might have been the next semester where we finally started moving into 20th Century composition and more modern composers. We were starting to study the Schoenberg piano pieces. And we were pulling the pieces apart, analyzing them in class. And the same thing—when that first day came and he handed us those discs and said go home and listen to this: "Wow! I don't like this." It was just all over the place and I didn't like it.

Weeks started going by, and we started analytically pulling all that stuff apart, and we started to understand the building blocks of what it was. It clicked. All of a sudden, I could hear this language that I had never heard of before, that was so colorful, compared to the traditional, harmonic material we had been studying throughout the classical period while we were in school. All of a sudden, it was like all these new sounds and new combinations of notes were there that it just snapped. It was instantly attractive to me.

And then when I went back to the Braxton, I was, like, "There it is." And then, I don't know. I must have paid Braxton's rent over many times because I have an immense collection of his stuff. I've studied all the composition notes and everything. He really is everything to me as far as listening to this stuff. He's just amazing.

AAJ: Some people might feel the same way, listening to your music. Now Joe Maneri and Joe Morris are two artists largely given credit for forging what's come to be known as the "Boston sound." Have you studied with either of them?

KF: I've never studied one-on-one with either of them, but I've studied watching them play, so many times. I used to come up, when I was in college, to Boston to see them play all the time. I used to love them. I never heard a group that could breathe like [Maneris]. The thing I liked most about the music was how excruciatingly slow some of it was. You could feel the entire room surge.

That was such an unbelievable template for me—to be able to see those guys, take that microtonal language and overlay that on something that was really, to my ears, jazz- based. Just the way that that group responded to each other—I remember seeing them, and bringing people with me and playing the CDs on the way up. They weren't into it, but getting them there, once they saw that group live, you could feel it happen. They just had something that was really influential to me. Not so much—if you were to look at my record Connections (Fuller Street, 2006) you wouldn't see that—but some of the things that I'm doing now, with the trio group, it really, really influences the direction. 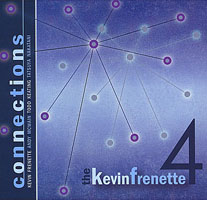 KF: Not so much microtonal but, like, just the overall feel of the groups. Because the Maneris had an understated pulse. And I think what we're playing now with the current trio—we're really playing with those tools that I got from the Maneris.

Joe Morris—he was another person that I used to go to see pretty religiously. He's definitely my favorite guitarist. The thing that I like most about his music is that every project sounds different. It seems like he designs materials for each project to create unique areas for him to work in and I really enjoy hearing him working that stuff out.

KF: Actually, I'm in a few things right now: Forbes Graham's Wild May, with [bassist] Ryan McGuire and [drummer] Luther Gray. That's a fantastic group, and Forbes writes some really interesting charts for that group. And what I like about what he writes is that if you were to look at the four of us, without knowing we come in with pre-read material, you could almost figure out what we might sound like. And what Forbes brings, as far as charts, totally smashes that. Because we can't do what everybody else is known for playing. Forbes brings in graphic scores— 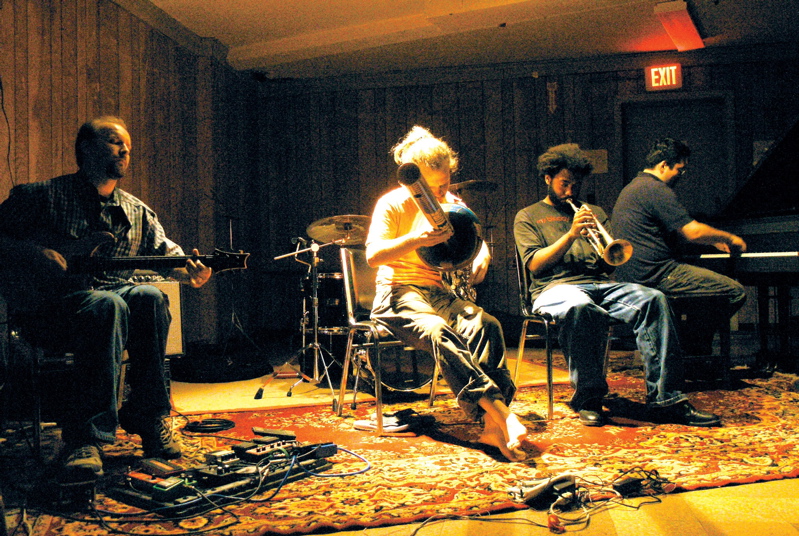 KF: Correct. It could be shapes, or sometimes it's word fragments. Sometimes I may look down and see a circle and I'll think, "How does Luther play that?" And I think that's what's great about that group: "How do you play that circle on the drums—on the guitar?"

AAJ: Is there any right answer, or any semblance of one?