Kenny Drew Trio: At The Brewhouse

By JERRY D'SOUZA
December 4, 2007
Sign in to view read count 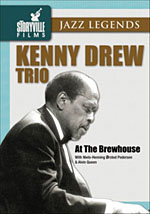 Kenny Drew had a marvellous sense of harmony, phrasing and timing on the piano. Whether he lingered on a note, or let it pass by in a wisp, the impression was delectable. His touch was magic.

Drew's early influences were Fats Waller, Art Tatum and Teddy Wilson, all of whom he encapsulated in his playing even as he went on to develop a vocabulary of his own. He recorded several albums as a sideman in the 1950s, including the legendary Blue Train (Blue Note, 1957) with John Coltrane.

Drew moved to Paris in 1964 before settling permanently in Copenhagen later that same year. It was there that he met Niels-Henning Ørsted Pederson and formed a long relationship with the bassist.

The concert at The Brewhouse, captured on this DVD, took place in 1992, the year before Drew passed away. Drew, Ørsted Pederson and drummer Alvin Queen have a poised, integral empathy, feed off each other's impulses and give the strong selection of standards a vibrant and considerable presence. Mile Davis' "All Blues is played with inescapable logic in its inventions. Drew feeds off of the initial buzz of the blues but then introduces some swing before he goes on past the melody to define, develop and stamp a swell of cogent ideas. The trio sustains their excursions for well over 11 minutes, making every moment a treat.

Drew pumps Dave Brubeck's "In Your Own Sweet Way with a two-handed attack yet does not overload the textures as he finds the melodic and harmonic centre. It is a scintillating take, with Ørsted Pederson being the perfect complement. His pliant motifs and sensitive dynamics extend the narrative to make this performance one of the highlights on the disc.

The standard You Don't Know What Love Is captures the essence of a ballad. Drew initially lets his right hand convey the message in the purest of terms, allowing the melody to seep into being and then giving it life and soul as he wraps chords around it. Radiance abounds as the rhythm section comes in and the music soars to an even greater high.

According to Ørsted Pederson, Drew was still in top form when this concert was recorded. That is most joyously obvious.

Tracks: my Shining Hour; You Don't Know what Love Is; Oleo; Bluesology; In Your Own sweet Way; All Blues; Blues in the Closet.