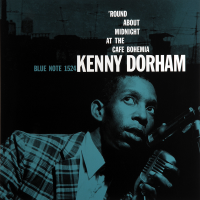 I think I have a new favorite hard bop record.

For many years, I considered Art Blakey and the Jazz Messengers the perfect hard bop band—the Beatles of the bop set. I still do. I don't know how Blakey managed to find the very best up-and-coming jazz musicians in America, year after year, but somehow he did. And somehow the various bands he put together, no matter who was in them, produced superlative 5-star records, year after year.

I have many Blakey/Jazz Messengers albums, and while they're all outstanding, I'd always felt 1954's A Night at Birdland was the absolute best. It featured an all-star cast—Blakey, Clifford Brown, Horace Silver, Lou Donaldson and Curly Russell—at the peak of their talents. If you can't groove to this record, you just aren't meant for jazz.

Later, I discovered Blakey and the Jazz Messengers' At the Café Bohemia, and realized I may have jumped the gun. Bohemia features a slightly different band a year later in 1955—Blakey, Silver, Kenny Dorham, Hank Mobley and Doug Watkins—and it's just about as good as Birdland. I especially grew to like Dorham's trumpet, which is every bit as interesting, if not quite as flashy, as Brown's.

Now, I concede, there may be an even better album.

In 1956, a few months after his date with the Messengers at Café Bohemia, Kenny Dorham returned to the club with his own band. The result was 'Round About Midnight at the Café Bohemia.

The cast is not as well-known as the Blakey bunch: Dorham on trumpet, J.R. Monterose on tenor, a young Kenny Burrell on guitar, fresh off recording his debut album, Bobby Timmons on piano, Sam Jones on bass and Arthur Edgehill on drums. It's blasphemy, I know, but I'd trade Silver for Timmons, who has a light, rhythmic touch and melodic flair. And Monterose has a very Charlie Parker-ish sound, which contrasts with Donaldson's more funky playing.

And then there's Kenny Burrell. Sometimes bluesy, sometimes jazzy, Burrell was at the start of a long, legendary career. Here, he shows up in the second set at the Café Bohemia and fits right in with the band. His solos are understated, spirited and fun.

The 2-CD set starts with a moseying blues, then slides into a sentimental ballad, "Autumn in New York." But just when you think this might be a mild night, the band starts swinging, beginning with a mid-tempo original, "Monaco"—it must not be the country, because Durham introduces it as Mon-AH-co—which quicky seques into a boppish jam. More bop standards follow ("A Night in Tunisia," "N.Y. Theme" and "Royal Roost") and now the band is really cooking.

For the next couple of hours, Dorham, Monterose, Burrell and Timmons are throwing solos back and forth, sometimes at breakneck speeds. A Dorham original, "Mexico City," doesn't sound Spanish so much as a Dizzy Gillsepie-ish bebop anthem.

All in all, it's as fine an example of hard bop as any ever recorded. Dorham may not be as famous as Miles Davis, Diz, Fats Navarro or Clifford Brown, but he is a fantastic composer, an infectious trumpeter and clearly the equal of Blakey in leading a hard-driving (but short-lived) combo.

A note about the CD: Don't get the original single-disc album with six songs. Get the 2-CD Complete 'Round About Midnight, with 17 cuts. It's like spending a long night at the legendary old jazz club.