By MARC DAVIS
December 9, 2015
Sign in to view read count

Blue Lights is a wonderful combination of bluesy tunes and traditional bop fun, including a pretty hot version of Duke Ellington’s “Caravan.” 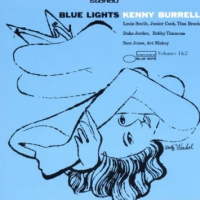 The name on the cover is Kenny Burrell, but Blue Lights isn't really a Kenny Burrell album. He may be the leader, but the stars are everyone else. This is truly a democratic 1950s jam session.

I came to Blue Lights fresh from Burrell's Midnight Blue, expecting another laid-back blues guitar vehicle. Not even close. Midnight Blue is where Burrell wound up in 1963. Blue Lights is where he came from in 1958 —a pretty straightforward hard bop romp with seven great solists, most of whom are underappreciated.

The name you know right away is drummer Art Blakey, but this isn't his star turn. Yes, he takes a few volcanic solos—he wouldn't be Art Blakey if he didn't—but mostly he's the propulsive backbeat to everyone else.

To my ears, trumpeter Louis Smith is the real revelation here. Smith is one of those almost-unknown names from the classic 1950s bop era, a guy who turned out a couple of terrific albums and then, in a flash, disappeared. I loved Smithville, another 1958 Blue Note gem, and I love Smith here, too. He's every bit as good as Clifford Brown or Lee Morgan, and I found myself looking forward to his solos on every tune.

Tenor saxman Tina Brooks is another almost-unknown who sounds great here. Tina—yes, he's a he, despite the name—recorded mostly as a sideman for more famous artists. He also put out two of his own excellent Blue Note records in 1958 and 1960. On Blue Lights, he plays alternately smoky and hot. Confusing matters, another tenor, Junior Cook, plays with Brooks on nearly all the cuts. The two tenors are easy to confuse. Both are pretty terrific.

All in all, Blue Lights is a wonderful combination of bluesy tunes—hence the album's title—and traditional bop fun, including a pretty hot version of Duke Ellington's "Caravan." But it's definitely a team effort, and listeners looking for a guitar album should turn elsewhere.

Postscript: Check out the album cover by Andy Warhol. Granted, it's no Campbell's soup can, but still... Andy Warhol on a jazz record. Who knew?

Availability: Easy to find in three formats: Just Volume 1, just Volume 2, or both together