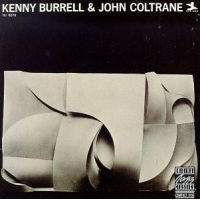 Albums in which one jazz great "meets" another jazz great hold a special fascination with listeners and usually the collaboration itself is enough of a selling point to include it as the title. Consider Gerry Mulligan, who tended to record his best playing in tandem with another, like Ben Webster, Paul Desmond, and Stan Getz. Another frequent collaborator was Coltrane, who recorded with Ellington, Hawkins, and Hartman; however, his brilliant quartet recordings for Impulse tend to overshadow recordings such as Kenny Burrell and John Coltrane, which has recently been remastered in 20 bit.

Both Coltrane and Burrell were at pivotal stages in their career at the time of this session. Coltrane, currently with Miles Davis, wasn't afraid to dine with the jazz giants but still couldn't stop putting his elbows on the table from time to time. Burrell was a highly respected sideman, able to fit seamlessly into any context, who also recorded sturdy sessions as a leader. However, what makes this record stand out is the contributions of all five members, who seem to have an equal amount invested in it; this record, which could easily turn into a showcase for the two leaders, ends up as a group effort where everyone gets a chance in the spotlight. Coltrane and Burrell frequently trade off the first solo chair, never hogging the spotlight, and on "Big Paul" the rhythm section is allowed to navigate the changes for a few minutes while the two leads sit out. The end result is a record in which the best is brought out in five musicians rather than three musicians helping two reach new heights.

As you might expect, the soloing is fine throughout; Coltrane's bold tone, marked by dense arpeggios, is a harbinger of early classics like Giant Steps. Burrell, who plays with more of an edge than other guitarists of the era, pulls multiple riffs out of his bag of tricks. We get all this and a bowed solo from Paul Chambers. The highlight of the session is "Why Was I Born?," a duet between Trane and Burrell, which is intimate and beautiful. It's a treat to hear Trane accompanied solely by guitar, a setting that he only explored once. (In Coltrane's case, the answer to the question posed in the title is to record Kind Of Blue.)

Both artists went on to other things after this recording, but it would be interesting to hear what would happen had they recorded again a few years later. Both artists reached their most personal statements in 1964; Coltrane, the spiritual A Love Supreme and Burrell the criminally unrecognized Guitar Forms. In both albums each artist was branching out into new territory and another recording together would certainly have been rewarding. Still, though, we should be glad that we have this session as an example of what can happen when these two great minds came together.

Freight Train, I Never Knew, Lyresto, Why Was I Born?, Big Paul.