Having never heard Kendra Shank but respecting Geoffrey Keezer whose work on the piano is nothing shy of surprising and always engaging this concert at the Douglas Beach House on July 25, 2010 was a must see. Geoff had played the Douglas Beach House several times over the past couple of years and so he was known by the audience. Kendra had performed at the Bach in 1990 but she was a relative newcomer to the venue. Some in the audience knew of her singing and had come a long way just to hear her once again. When the quartet took the stage they were backed by Hamilton Price on the bass and Zach Harmon on drums and tabla. 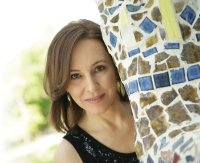 It didn't take long to find out that this was going to be a unique concert, an adventure into the worlds of two well honed musicians. The second number opened with Shank's "Incantation" that flawlessly segued into Abbey Lincoln's "Throw It Away." Instead of playing his trap set, Harmon kept the beat with his tabla, giving the tune a unique Middle Eastern flavor. Keezer began playing the keyboard as one would expect but as Harmon's tabla began to take the forefront, He leaned over and played the strings of the Steinway grand piano. When he sat back down he shifted into a Latin feel on his piano. All the while Kendra Shank vocally worked with both of them, peppering in here and there with some hot scat singing.

It was obvious that Kendra Shank is an adventuress when it comes to her music. She and Keezer possess the virtuosity to let the music happen, meaning that when they perform, they are not simply playing or singing the right notes. What is being heard arises from their heart and soul. When an audience hears that kind of musicianship, it is intuitively understood and is expressed not by a limp, polite applaud but by a joyous one. That happened over and over again during the concert. Shortly after the opening of the second set Keezer took the mike and explained Shank's virtues as a jazz singer. He said, "I have three things that I look for in a musician: First, a nice voice; second, isn't afraid to take chances; and third, cool tunes... and Kendra Shank has it all." Music writer Gary Giddins wrote about Shank, "one of New York's most original performers."

It was that originality and her ability to stretch that made the concert a roaring success. Shank can be vocally explosive as in the number "Beautiful Love" which she opened singing a poem from Rumi. On the other hand she can sing softly and seductively. She and Keezer never departed from being on the "same page" but instead were clearly in synch on each and every tune. Toward the end of the first set, Shank used the mike as an adjunct to her voice by passing it before her mouth to gain effects. Sometimes when scatting she cupped her hand to her mouth to create interesting and unusual effects that fit perfectly with the song. At the end of set one, someone from the audience cried, "Awesome" and the people stood to give them a powerful ovation.

Some members of the audience had travelled for two to three hours just to hear her that day. As the concert drew to a close it was clear that the house had been given a huge treat by Kendra Shank, Geoffrey Keezer, Hamilton Price and Zach Harmon. The sun had already set over the Pacific and the boutique venue by the time everything wrapped up. The audience gave them an uproarious applauds, calling for an encore. However, that was not to be because Price and Harmon had to leave to catch a flight back to Los Angeles. On the way out, listening to the chatter from the people it was clear that Kendra Shank's popularity had blossomed because she gave it her all at the Douglas Beach House that late afternoon and evening. She is simply one of the most exciting female jazz vocalists working today.