Fortunately the volcanic ash cloud which had closed the skies of northern Europe for almost a week was deemed insufficiently dense to prevent further flights (or further impair the profits of the airlines depending on your degree of cynicism). No problem with that as it allowed reedman Ken Vandermark and drummer Paal Nilssen-Love to jet in from Geneva for their two night residency at Dalston's Cafe Oto. Tonight they were appearing as a duo in the first set and with special guest John Edwards on bass for the second. 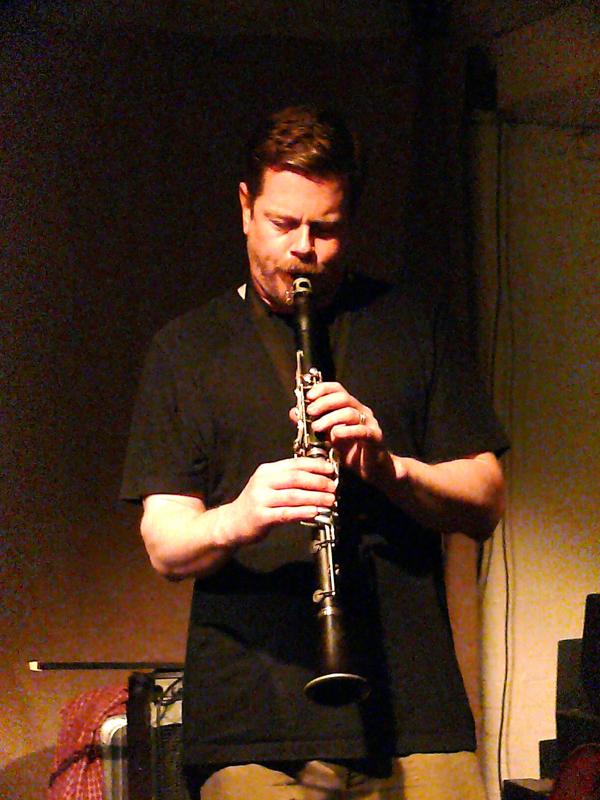 Ask any enthusiast who the hardest working person in the business is and the American's name is likely to come fairly near top of the list. Graphic testament is available on the excellent Musician DVD which brings home exactly how much hard grind is involved in making sure that the music makes it to the stage or CD. Vandermark is not just a tireless organizer, composer, and instrumentalist, but also a commentator, writer, and astute thinker, especially in drawing parallels between his muscial expression and photography and other arts. His website must set the standard for a musician of any genre in terms of content and currency. His Facebook fan page shows regular interaction with listeners , offers notable insights into the creative process and contains more painfully honest self assessment than is the norm.

Nilssen-Love has the music in his blood: his parents ran a jazz club and his father was a drummer to boot. Making his mark from an early age, the Norwegian established himself not only with Scandinavian bands like the Frode Gjerstad Trio, Atomic, and The Thing, but also in various projects with Vandermark: with School Days in 2000 and since then FME, FireRoom, iTi, the Territory Band, and latterly joining Peter Brötzmann's Chicago Tentet and Hairy Bones Quartet. In duet with Vandermark, he has five recordings including 2009's terrific brace comprising Milwaukee Volume and Chicago Volume (both Smalltown Superjazz).

Together they unleashed a barrage of high energy free jazz, going straight for the jugular, pinning the audience to the seats with their formidable opening gambit. However despite the absence of predefined elements this was not the typical unfettered mayhem as Vandermark invoked a sense of structure by his use of repetition. Some of his riffs wouldn't have sounded out of place on a Vandermark 5 gig. These patterns had the effect of demarcating the narrative thrust, but at the same time shifting the spotlight onto his partner who's ever changing rhythmic fusillade more than made up for the lack of variation by the hornman himself. 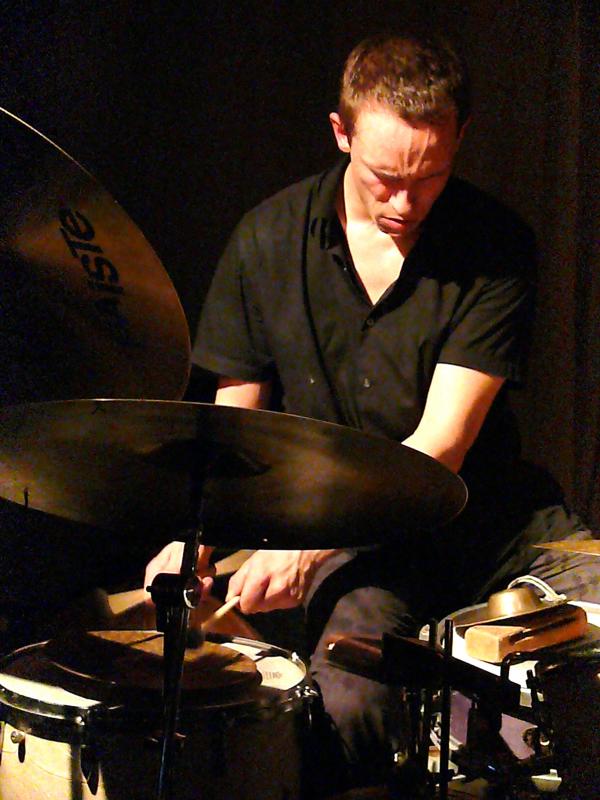 Though his head and body were largely static, Nilssen-Love's limbs were a blur. A maelstrom of crisp powerplay, he nonetheless integrated allusions to the saxophonist's restated motifs (or was it vice versa), into the churning mix. So unerring was his focus that his drumsticks seemed to possess a life of their own. But such explosive stickwork was merely one aspect of his game. He also possessed a more typically European improv suit in which textural exploration dominated. At different times he deployed cymbals, gongs, woodblocks, and even a tambourine on his drum heads from which he extracted subtle resonance or madcap clattering. Hands and fists smote the cymbals alongside the more expected brushes and sticks.

Even without a mic, Vandermark's broad impasto tenor saxophone and more finely etched clarinet effortlessly pierced the tumult. When animated, the reedman stepped back and forth, but was essentially anchored to same spot, while his horn traced a more spirited trajectory up towards the ceiling. One of the highlights of the performance was the reedman's clarinet solo in the first set. He launched a circular breathed drone, creating a spacey ambience, before edging into stuttering shrieks and multiphonics, contrasting multiple voices one against another. Eyes clenched shut; he finished on a prolonged whistle at which juncture Nilssen-Love erupted prompting the hornman to continue on with a series of hoarse guttural cries, just one example of the accomplished ease with which they transitioned between moods. Shared experience meant both men were highly attuned to the opportunities presented by the other's style. Elsewhere Vandermark tempered free skronk with jazzier phrasing, building tension and release into the ongoing colloquy. After the compelling visceral excitement of the long fiery opener, came a brief, meditative piece, spreading calm before the break.

Vandermark has characterized the challenge for the duo after eight years, as one of finding new risks. They have so much history in so many contexts that communication when playing together is a given. Perhaps the introduction of guests, like John Edwards after the interval this evening (and violinist Philipp Wachsmann the next), was indicative of that need to push the boundaries. Edwards has become bassist of choice for visitors to London and residents alike, establishing a massive reputation for his energetic momentum and muscular tone.

However it didn't work out as well as anticipated at the outset. With a start of similar high octane grade to the first set, even with an amp the bassist simply found it hard to be heard and harder to carve out a niche amid the bristling wall of sound generated by Nilssen-Love's whirlwind drums and Vandermark's repeated overblown tenor squeals, in some way taking up the role a bassist might fill. But as the set progressed they discovered solutions, the easiest being for Edwards to up his volume in stages to a level where he was audible. The bassman was also able to assert himself initially in duet with Nilssen-Love's precise timbral eddies, then with Vandermark's lissome intertwining clarinet. 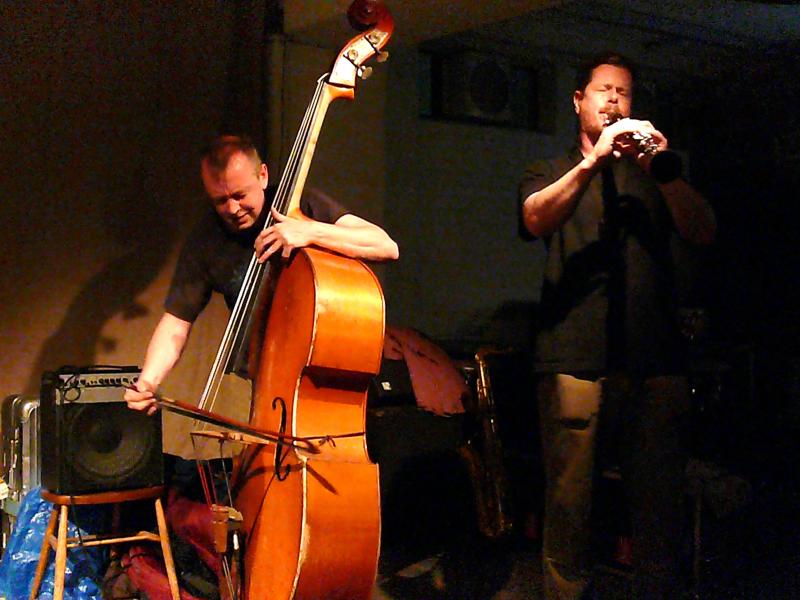 Nonetheless the power trio was the dominant mode. A Vandermark tenor outpouring morphed into staccato dialogue with whip crack bursts from the drummer, only to evolve into further extreme territory. Indicative of the intensity, Edwards plucked so forcefully that a string came off the bridge of his bass, but made no discernible impact on his progress. In some ways they formed a very responsive threesome. So when the bassist concluded a sequence of upper register arco scrapes straightaway Nilssen-Love entered with exuberant brushwork. When Edwards began walking his bull fiddle the textures switched again. Another nice touch materialized when the bassist took a Vandermark riff as the jumping off point for a solo passage, soon incorporating gasps, sighs and very quiet harmonics which inspired the American to pick up clarinet for a section of mercurial interplay. On occasion mellow, but more often ferocious, this triumvirate was ultimately a success and at times even touched on the majestic.