By JIM SANTELLA
October 2, 2006
Sign in to view read count 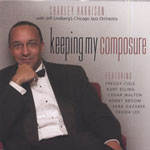 The guest artists on Keeping My Composure work with Jeff Lindberg's superb Chicago Jazz Orchestra to bring memorable big band themes to the fore, while Charley Harrison steps up for five selections with a comfortable rhythm guitar backbone that encourages swing. Hot solos from the band's sidemen keep things going strong, and the band's guests take it up a notch. Bobby Broom joins Harrison on "2 by 6 for a two-guitar adventure in which both weave a pleasant story in tandem and then separate for some soulful solo work.

Half of the album's selections are Harrison's original compositions. He features different folks throughout, and he finds himself in good company. Tenor saxophonist Brian Sjoerdinga is featured on the sparkling, up-tempo jaunt "B.S., which clears the air for big band enthusiasts who appreciate the way sections talk to each other. It's hard to tell whether the featured artist inspires the band or if the band inspires him; both work this song so well.

Pianist Cedar Walton is featured on "Lori's Dream, which drifts off into a smooth afternoon's rest period. Singer Frieda Lee sings "Pure Imagination, "More Love and "Corcovado with affection. Organist Dan Trudell stomps "Vitamin B-3 with a powerful swing, while saxophonist Bill Overton colors with the kind of loose tenor sound that cools every time up. Kurt Elling sings "Jeannine with his usual straight-ahead aplomb, while Freddy Cole sings "On the South Side of Chicago with the heart of a dedicated veteran who knows how to control the mood.

Sara Gazarek sings two Harrison originals, "Recipe for Romance and "If You Were Mine, which both allow her the freedom to interpret with a warm heart. She has a beautiful voice that lends itself to both big band and smaller ensemble performance. Harrison has opened doors for her on this album and he's provided similar avenues for each of the other soloists who appear with him.