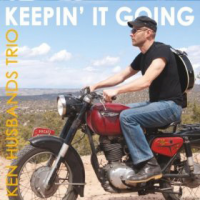 San Francisco Bay area guitarist Ken Husbands is a well-travelled man. He grew up in Massachusetts, lived in Paris for a few years then moved to Oakland, California, in 2005. Along the way he's gained a PhD and developed an electric guitar style that encompasses many influences from jazz, fusion and other genres yet avoids sounding derivative. Keepin' It Going is credited to the Ken Husbands Trio. The trio is tight, the writing is fresh and the feel is upbeat.

Keepin' It Going is Husbands' third album as leader, his second with this trio lineup of bass guitarist Aaron Germain and drummer Otto Huber. Alongside Husbands' own compositions, both previous CDs featured guest vocalist Suzanna Smith on covers of songs by Leonard Cohen, Joni Mitchell and Bjork. Keepin' It Going is wholly instrumental, the compositions all originals.

The album clocks in at just under 40 minutes—no wasted minutes, no low points or filler. From the slippery, fluid funk of "East Coast Groupings" to the effortlessly sexy samba of "But I Don't" the catchy riffs, swinging grooves and general good-time vibes just keep on coming—Keepin' It Going really does keep it going.