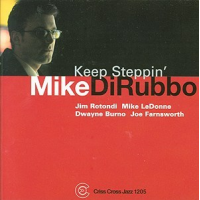 One of the great pleasures of being a jazz fan is bearing witness as a young musician makes the leap from someone to watch to a powerful, not-to-be-missed performer. Therefore it is deeply satisfying to hear Mike DiRubbo, only two years after his promising debut on Sharp Nine, emerge withKeep Steppin’, a brilliantly realized recording for Gerry Teekens’ Criss Cross label. Loosely basing the music within the parameters of hard bop, DiRubbo takes this part of the jazz tradition and, by the sheer resoluteness of his playing, forges something potent and essential. The disc rides high on the combined strengths of a cohesive group sound, arresting compositions, and compelling individual performances by a quintet of energized young veterans. Clearly inspired by one another, DiRubbo and trumpeter Jim Rotondi make a bang-up front line. Comprised of pianist Mike LeDonne, bassist Dwayne Burno, and drummer Joe Farnsworth, the rhythm section adapts to the feel of various kinds of material, always giving the band an agile, extroverted lilt that never becomes cluttered or overdone.

The opening track, “Encounter,” a burning, up-tempo composition by LeDonne, sets a very high standard that is maintained for the rest of the disc. As the horns play the exultant melody in unison, Farnsworth’s precise strokes on the hi-hat and equally exacting cymbal crashes creates tension that indicates things are about to become exhilarating. DiRubbo eases his way into a solo over the pianist’s Latin vamp, and is soon off and running. He finds a space within the edifice created by Burno’s sturdy walking and hard push of Farnsworth’s ride cymbal, blowing chorus after chorus of energized ideas, admirably organized and nearly overwhelming in their emotional impact. Rotondi also initially takes his time, playing lazy singing phrases behind the beat, and then abruptly jumps to it with long, jarring eighth-note lines that dash through the music with dizzying velocity. Striking the keyboard as if he’s reluctant to let each note die, even during the most rapid-fire passages, LeDonne moves from Latin motifs to direct, straight-ahead swing and back again, sometimes bringing the two modes so close they’re almost literally on top of one another. Farnsworth’s rhythms are easy to follow but nonetheless rewarding as he integrates each drum and cymbal before concentrating on leaping, cleanly executed hits to the snare.

With a stick in one hand keeping straight quarter-note time on the cymbal, and the other hand going from a tom tom to snare (snares off) with a mallet, Farnsworth sets a very different tone on “Introspection,” DiRubbo’s serene composition in three-four. The saxophonist’s first solo doesn’t reach for the fervent highs attained by his work on most of the other tracks, but rather stays on a fairly even keel, favoring the methodical development of ideas which still manage to make a ardent impression. The second time around, after his restatement of the melody, DiRubbo’s playing is more animated, with a severe, almost obsessive quality before briefly returning to a peaceful state and then ending with an oddly festive coda.

A sustained burst of energy that is channeled by Burno and Farnsworth’s ability to hold a ludicrously fast tempo without any signs of strain, “The End Of A Love Affair” tests the mettle of each soloist. Although Rotondi and LeDonne are undaunted by the pace and express themselves commendably, it is DiRubbo who seems most at home in such hectic surroundings. He works around the pulse, deeming it unnecessary to play on every measure, yet stays in sync with the rhythm section and on top of every chord change.

“Bittersuite,” Sam Jones’ bright, bebop theme, makes a fine closer to a memorable set. The medium tempo brings out the most relaxed qualities in DiRubbo’s playing, but he maintains an edge, integrating double-time passages without sounding rote. Rotondi favors the careful construction of ideas over any artificial attempt to produce excitement, leaving enough space for Farnsworth to carry on with a steady issue of accents on the snare and cymbals. Not unlike his playing throughout the record, LeDonne never stays in any one groove for too long, going from an interlude of ringing, hard-hitting chords to far-reaching yet polished swing. Then Burno prods through a chorus, distinguished by a rich sound and a spry way with bebop-oriented phrases.