Clark Terry: Keep On Keepin' On 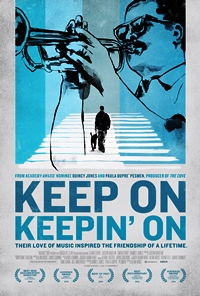 Produced by Quincy Jones and Paula Dupre' Pesmen with first time filmmaker Al Hicks the multiple award winning documentary Keep On Keepin' On brings an intimate view into the extraordinary friendship between trumpet great Clark Terry and aspiring young pianist Justin Kauflin. The film begins with what seems like a simple teacher/student session. But there's something different about the setting. Terry is almost bedridden, wearing a robe and oxygen mask and in declining health. Kauflin is blind. As the lesson concludes there's a shared gratitude between the two, a comradery, and it quickly becomes evident that their bond is more than just about music.

Born and raised in St. Louis, Terry, in his 90s, has persevered through poverty, racism, and adversity to be proclaimed as one of jazz's greatest trumpeters and within the film's interviews and concert snippets, that statement becomes understood. A recipient of a 2010 Grammy Lifetime Achievement Award he's performed in Count Basie and Duke Ellington's bands, recorded more than 900 albums, and personally deposited wisdom into many of today's jazz stars like Terri Lyne Carrington and Esperanza Spalding. With loving stories from Terry's wife, Gwen, inspiring comment from musicians and admirers—Herbie Hancock, Bill Cosby, Miles Davis—Terry's personality shines just as bright as the instruments he played.

Equally compelling is Terry's protégé Justin Kauflin a 23 year music prodigy who was born with a degenerative eye condition leading to complete blindness. Yet through his caring family and personal drive, he fell in love with playing the piano and went on to receive numerous awards and a scholarship at William Paterson University in New Jersey where he met Terry.

Each man's personal story is about music, positivity, and overcoming struggle. Life is difficult whether seen in the animated segment of Terry's deep desire to learn to play the trumpet as a child which lead him to create a makeshift horn out of scrap material or Kauflin's day to day challenges living in New York City. Terry's deteriorating health and Kauflin's internal struggles as semi-finalist in the 2011 Thelonious Monk Institute of Jazz International Piano Competition are empathetically captured on film.

Through Al Hick's masterful camera lens the viewer gains access to a poignant friendship and insights into their personalities and work ethics. In spite of his health Terry routinely practiced his music and tutored others. Kauflin traveled and maneuvered a routine between performances and lessons, always encouraged by Terry's fire—instructing Kauflin on the difference between "masters and amateurs" and to "to play his ass off" for an upcoming gig. Terry who is also battling the onset of blindness due to complications with diabetes finds encouragement from Kauflin.

Terry's quiet legacy as a teacher may be his greatest achievement. More than just a stunning horn player he loved people and freely shared his knowledge with others, including Australian filmmaker Al Hicks. Through recollections from Terry's first student, 13 year old Quincy Jones, and a host of students that included Wynton Marsalis and bassist Rodney Whitaker it is clear that Terry's "life force" was indeed a quality that drew others to him as singer Diane Reeves so eloquently states in an interview.

Music was Terry and Kauflin's primary connection with some of the most memorable scenes centered on late night sessions between the two discussing and playing pieces where Kauflin traded a few bars alongside Terry's signature jazz scat mumblings made famous by his 1966 hit recording Mumbles (Mainstream).

Filmed over the course of five years Keep On Keepin' On invites viewers into the musicians lives in the span of 89 minutes which seems more like a lifetime where their joys, hardships, triumphs, and humor are unveiled and shared like close family members. Though Terry is Kauflin's mentor and teacher, Kauflin equally reinvigorated Terry and emerged from student to an endearing son in this unforgettable documentary.

This film is currently playing in selected cities.