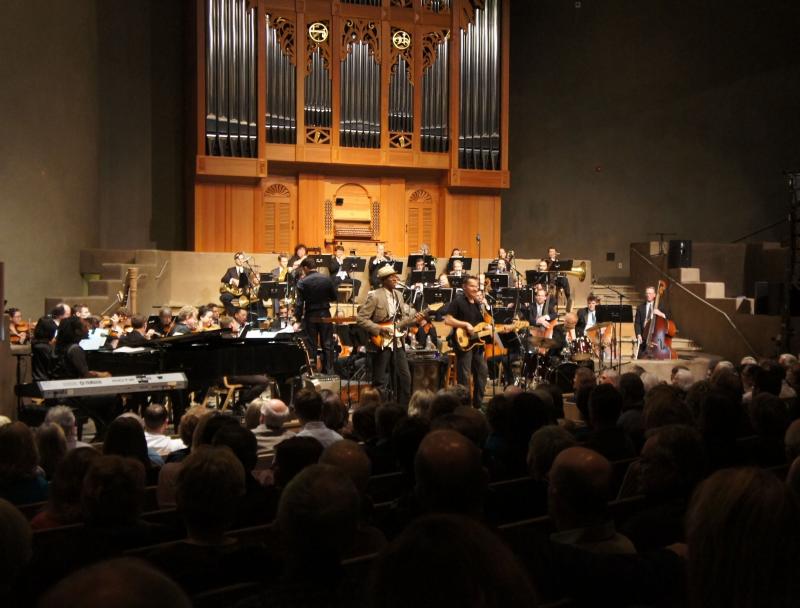 It was a bold step to book bluesman Keb' Mo' to perform with the Arizona Musicfest Orchestra, a performance that could have been constrained by the rigidity of orchestral charts. But Mo' and his trio stayed loose and true to his trademark style, sometimes appearing buoyed by having 52 side men and women under the baton of Robert Moody.

During a nine-song set, the guitarist/vocalist delivered his straightforward story-songs to a sold out house. His devotion to Southern-style blues was complemented by the orchestral arrangements of A. Patrick Rose, although that obviously allowed fewer improvisational elements.

Mo' played electric guitar for the first two songs, "France" and "More Than One Way Home," then he changed to acoustic for the sad commentary of "Just Like You." He switched to resonator with bottleneck finger-slide for "Shave Yo' Legs." That also was his choice for the nostalgia of "Henry," a tribute to his early influence, Taj Mahal (born Henry Saint Clair Fredericks) that was punctuated by string section harmony and solos of flute and muted trombone.

The orchestra came close to overpowering his vocals only once, on "The Whole Enchilada," but the chart was transported into new turf by interlaced oboe and bassoon sounds. "She Just Wants to Dance" featured a stop tempo element that perked up the end of the half-hour set. The audience demanded an encore that resulted in "City Boy," Mo' adding harmonica while the flute and oboe injected riffs. His closing encore, "Government Cheese," brought people up from their seats to dance in place.

The first part of the concert featured Moody conducting the orchestra for "Fantasy," a mélange of a dozen Duke Ellington charts arranged by Ralph Herman. The orchestra also performed George Gershwin's score for the film "An American in Paris." A brief departure of the evening's blues theme was "The Stars and Stripes Forever" led by guest conductor James Morrissey, a longtime Musicfest supporter; that prompted friends in the audience to dub him "Jim Mo," and others to nickname music director Moody "Bob Mo."

This is the festival's 22nd season, a series that originated as a classical focus, then added jazz, pop, Broadway and country music. The blues element was new to the lineup, although last year the Brubeck Brothers quartet fronted the orchestra. Earlier in this season were jazz concerts by vocalist Tierney Sutton and pianist Shelly Berg, Treme Brass Band and pianist Taylor Eigsti. Arizona Musicfest is a nonprofit organization that also provides youth scholarships, concerts for students and community programs.