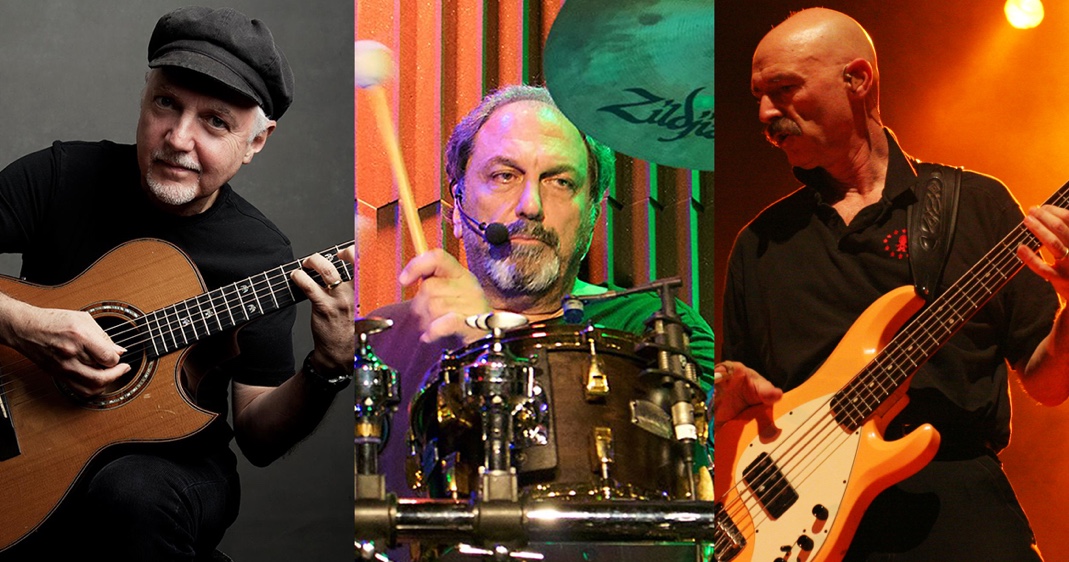 “Phil [Keaggy] is a great player, as is Tony [Levin], so all I had to do is just not f**k up. If I stayed out of their way, I came off smelling like a rose, I hope.”
—Jerry Marotta

Veteran musicians Phil Keaggy, Tony Levin and Jerry Marotta spent more than a decade crafting their debut collaborative album, The Bucket List (Self Released, 2019), the unique product of each artist's influences and pedigree.

Marotta played drums and recorded with Peter Gabriel from 1976 to 1986. His introduction to music took the form of clarinet lessons in the fourth grade. Marotta recalled that "My music teacher wrote 'Jerry has absolutely no aptitude for the clarinet.'" After his brother, the accomplished drummer and composer Rick Marotta, brought a drum kit into their home as a favor to a friend who had been drafted, he discovered his passion for the drums. "It was soothing to get all four limbs going crazy."

Bassist and stick player Tony Levin recorded with Peter Gabriel and Marotta starting in 1976, going on to tour and record with legendary bands like Yes, Pink Floyd and King Crimson. "It just appealed to me," Levin said, remembering how he started playing the bass at age ten. "And that's a lucky thing, because after all these years of just playing the bass I still love just playing the bass."

Guitarist Phil Keaggy is an accomplished songwriter with a huge library of instrumental and vocal albums who has won several awards for his contributions to contemporary Christian music. After finding inspiration in The Beach Boys, The Ventures and Elvis Presley, Keaggy made a splash with The Glass Harp, a three-piece band he joined during high school. Keaggy played Carnegie Hall with The Glass Harp by age 20, and opened for bands such as Yes, Chicago and The Kinks. "I think that's one of the reasons why Jerry, Tony and I click," Keaggy said, "because I grew up doing a lot of three-piece arrangements with The Glass Harp."

In 2008 executive producer Paul Grimsland, a friend to all three musicians, arranged a meeting. "He thought it would be great idea if we got together to jam and see what happened," Marotta said. Keaggy described how Levin and Marotta joined him for a performance at a New Jersey church before recording in Marotta's home studio in Woodstock, New York. "Most of those folks probably didn't know who these guys were, what legends they are."

Marotta described the group dynamic during their jam sessions as comfortable and natural. "Phil is a great player, as is Tony, so all I had to do is just not f**k up. If I stayed out of their way, I came off smelling like a rose, I hope."

Keaggy remembered that "From the moment we started it was just creativity, creativity, creativity. Paul seems to think that there's probably enough material for another album." Levin detailed how the trio easily settled into a loose format. "It was wonderful. When you have musicians who are professional, who respect each other's musicality, it's never hard. It doesn't sound like just jamming on one chord."

"If anybody did anything, we generally just liked it," Marotta said, describing the process of revising material over time. "I don't need everything to be perfectly just the way Jerry Marotta wants it to be."

Levin only modified a few bass parts after the trio's first jam sessions. "Phil worked very hard on the guitar parts," he explained. "He didn't just clean them up. He made them brilliant, added some things and made the record what it is."

In 2014, Keaggy began to review the hard drive containing the trio's jams. "I wanted to really keep the quality and integrity of the original tracks," he said. After working on his lead guitar parts in Nashville with Grimsland on two separate occasions, Keaggy sent the finished tracks off to be mixed and mastered.

When asked about the restrained simplicity of his bass lines on The Bucket List, Levin clarified that he never felt like he was holding back. "I listen to the music and I become a fan of that music, and I try to fashion something on the bass that will help that music. It was pretty complete as it was, so I could hold down the bottom end or go up high once in a while."

"Where's Phil" stands as the only track without Keaggy's layered guitars on the finished album (which was released on January 11, 2019). Marotta explained that the track serves as a brief rest from the album's intensity. "A brief moment, just Tony and I doing our thing for 90 seconds. I love that."

"But it's kind of cute that he didn't play on it," Levin said, addressing Keaggy's absence on that track. "It's a sign of a really musical musician that he's willing to just not play in a piece and say, 'Well, that's kind of alright the way it is.' I'd like to think that I'm that kind of player myself."

"We've all been around the block, you know, six of seven decades worth," Marotta said when discussing "Carved In Stone," The Bucket List's nostalgic rock track. "That's got kind of an old school, '70s, ragged-ass rock thing to it."

Keaggy mentioned that "Carved In Stone" could have easily become a vocal song, and that the trio considered featuring a vocal track on the album. "Jerry wrote a beautiful song called 'You Have Spoken,' but it might have stuck out like a sore thumb on an instrumental album."

Marotta recalled hearing a song in 11/4, learning that groove and eventually incorporating it into "Sometimes 11," the album's opener. "That song probably just started with me playing that groove," he said. "That's one of my favorite tracks on the record, which is why I actually put it first."

Levin picked the album's longest track, "Sometimes We Up," as his favorite. "It's got the looseness of the way the album was put together, but it also sounds like a really great song. It amazes me the way Phil spontaneously came up with a song that sounds like he spent a long time writing it."

"The thing I love about the album is that it's got some real precision and precise moments," Keaggy said. "You can tell that we were really listening to each other as we were tracking and playing together."

Keaggy shared the trio's plans to spend January practicing the material on The Bucket List for three live shows in late February and early March, with guitarist Mike Pachelli joining the trio and helping perform the album's multilayered guitar parts. "I think it will turn out good if we just have fun, get pretty close to the arrangements and see how it goes."

Although the trio has not planned any recording or performing after these shows, they all expressed hope that they would continue working together. "We're all very busy," Marotta said. "Tony can't do any more gigs after this until 2020."

"We'll be looking for a time and a way that we could tour again together and bring our music to more audiences in more cities," Levin said. "We haven't really discussed it because we've been busy just trying to get this very short period where we can tour."