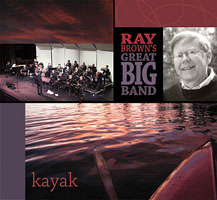 Not to be confused with the late, legendary bassist of the same name, San Francisco-based bandleader/arranger Ray Brown, an ex-trumpeter with the Stan Kenton and Full Faith & Credit Big Band big bands, drives his own nineteen-piece ensemble populated by the Bay Area's A-list musicians. Brown, whose percussionist father pioneered jazz education in the public schools of Long Beach, New York over seven decades ago, steadfastly maintains the legacy of the recently-deceased Canadian composer/arranger Rob McConnell in his deft yet swinging charts of Great American Songbook and contemporary jazz standards.

Cole Porter's "So In Love" (including an interpolation of Henry Mancini's "Charade") kicks off the CD with lead altoist Mary Fettig, one of three Kenton alumni (the others are trumpeter Steve Campos and the leader) aboard, displaying her formidable solo abilities. Fettig also shines on "Indian Summer," along with Brown's brother Steve on guitar. The title track, by Canadian-born trumpeter Kenny Wheeler, showcases Steve Brown together with trumpet prodigy Erik Jekobsen. Tenor saxophonist Charlie McCarthy occupies center stage on "I Fall In Love Too Easily" (the Jule Styne/Sammy Cahn classic immortalized by Frank Sinatra and, later, Chet Baker), and also contributes to Frank Loesser's "I've Never Been In Love Before" (from the original Broadway production of Guys and Dolls but sadly cut from the film version), which contains this album's lone vocal by Gail Dobson.

Brown dedicates his chart on Gershwin's "Our Love Is Here to Stay" to his late brother, Glenn, Jr., and his wife, Barbara (this was their favorite tune), and showcases trombonist Dave Eshelman (Ray's colleague in Full Faith & Credit Big Band and erstwhile leader of his own Bay Area-based large ensemble) and tenorist Bennett Friedman, the latter of whom also delivers a blistering improvisation on John Coltrane's "Moment's Notice." Sergio Mendes' ballad, "Song of No Regrets," presents Jekobsen, this time on flugelhorn, with the reed section beautifully led by Fettig on alto flute. Last, but most certainly not least, Miles Davis and Victor Feldman's "Seven Steps to Heaven," carries the band out in a most swinging manner, complete with tongue-in-cheek quotes from Harold Arlen's "Ding-Dong, The Witch Is Dead!" and Stevie Wonder's "Isn't She Lovely,," plus solo statements from McCarthy, trumpeter Don Beck, and, in his only solo, Los Angeles-based drummer Steve Houghton, who otherwise propels the band with great precision.

So In Love; Indian Summer; Kayak; I Fall In Love Too Easily; Blue Daniel; Del Sasser; Our Love Is Here to Stay; I've Never Been In Love Before; Turn Out the Stars; Tricrotism; Moment's Notice; Song of No Regrets; Seven Steps to Heaven